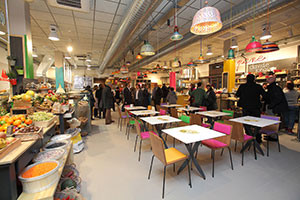 Urban agriculture is the essence of thinking globally and acting locally, and ag advocates in Milan, Italy have found a way to blend those two aspects into municipal policy with worldwide implications.

The city of Milan began the four-stage process to develop the pact by assessing strengths and weaknesses. It then began developing objectives in partnership with the public, continuing onward to seeking buy-in from major institutions. Lastly, it is working on developing pilot projects. The goal is to target world hunger by establishing local supply chains right where people live.

Milan’s mayor, Giuliano Pisapia, decided it was a model that could work anywhere, so he took the Milan Urban Food Policy Pact global. So far, 116 cities on several continents have signed on. U.S. adopters include the cities of Baltimore, Birmingham, Chicago, Miami, New York and San Francisco. Advocates have taken their project to the floor of the UN and to the recent COP 21 meetings in Paris.

Bringing the process to cities across the worls was a natural next step, according to Rafaella Scalisi, Director of International Relations for the City of Milan.

“Cities are the closest institutions to people,” says Scalisi. “They face daily a wide range of issues directly or indirectly connected to climate change: pollution, mobility, energy consumption. Urban areas are where most food is consumed, where eating habits are shaped, where food poverty and diseases related to bad nutrition become more evident. Thus, many innovative solutions to foster a more sustainable lifestyle are launched and experimented with in cities. Debate on the impact of the food system on climate change and discussions on how to curb GHG emissions are livelier in cities, so local authorities are both encouraged and somehow obliged to take action.”

Milan’s leading role, she says, was a natural outgrowth of other developments.

“From June to October 2015 Milan host the Universal Exposition. The theme was ‘Feeding the planet, energy for life.’ So for six months the city has enjoyed a great visibility and a unique political opportunity:  to shed a light on the issue of food and sustainability and to bolster the role of cities,” she says.

Meanwhile, the city has adopted its own food strategy through a wide participatory process.

Milan is part of the C40 climate smart network, and has undertaken some projects to fight again climate change such as the adoption of a congestion charge, separate collection of household waste and LED street lighting. Milan has rapidly become the Italian capital of the sharing economy and many start-ups are being created ,in the food sector, according to Scalisi.

Scalisi believes that the potential of cities to promote sustainability on the global stage is just beginning.

“Cities have the clout to influence international agenda because they’re on the frontline of many of the current challenges: immigration, climate change, health, terrorism,” she says. “Cities can raise awareness, contribute to building international response, and drive structural changes.

Scalisi notes that cities involved in the Milan Urban Food Pact have different sizes, different economic and social conditions. Moreover, their governance and decision-making processes are different. It’s may not always be easy to identify a common framework for action at a local level.

“Nevertheless, benefits of this city-level collaboration can be huge. The experience of the Milan Urban Food Policy Pact (MUFPP) shows the will to improve the sustainability of local food system is a powerful tool to overcome the difficulties,” she says.

Hub-to-school: Vermont Food Hubs and Schools Work Together to Drive Localization of the Food System