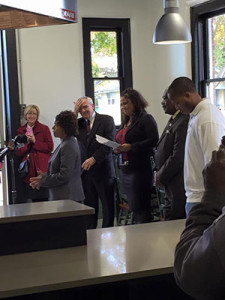 A $430,000 grant from the City of Fort Wayne provided initial funding for the farm and an associated commercial kitchen. The operation is leased to and operated by Growing Minds Educational Services, a company devoted to tutoring students in helping them live up to their potential.

That was until four years ago when Brooks heard northeast Indiana farmer Pete Eshelman speak at a business conference. Eshelman is not your average farmer—the former New York Yankees baseball player now raises Wagyu, a legendary Japanese breed of beef cattle, along with Mangalitza pigs, Dixie Rainbow and Naked Neck chickens, and a variety of other livestock and produce.

Eshelman quickly became a mentor for Brooks, and this relationship spilled over to Growing Minds, as Eshelman hosted students on his farm for field trips.

After realizing many of the students at Growing Minds didn’t know much about where food comes from (including the fact that potatoes don’t grow on trees), Brooks and Hodges saw that agriculture could be incorporated into a cutting-edge curriculum to help their students become more aware.

So in 2013, they enlisted students to help build five raised beds on site at Growing Minds. Once up-and-running, the beds enabled students to learn about salads and where salad ingredients originate.

This kind of hands-on experiential education brought results, and in 2014, Brooks was invited to participate in a public forum, which in turn led to Growing Minds receiving grant funding for its utilization of agriculture in the learning process.

When Hodges and Brooks learned about an available vacant firehouse, they jumped on this opportunity to make a good home for Growing Minds’ urban agriculture efforts.

Now, the Growing Mind urban farm comprises three-quarters of an acre and includes a greenhouse and hoop houses. With plans to operate 50 weeks out of the year, the farm grows a variety of produce, including collard greens, spinach, Brussels sprouts, cabbage, broccoli, Chinese cabbage, and Swiss chard.

Consequently, healthy eating and learning how to grow healthy food are a key part of the educational curriculum at Growing Minds. Some its students come from Allen County’s Department of Child Services or Juvenile Center and have not benefited from much exposure to healthy food, much less agriculture. Hodges and Brooks see the farm as a wonderful teaching tool for a variety of subjects other than agriculture, such as science, technology, economic development, and citizenship.

The endeavor is not limited to Growing Minds students—their families, as well as community members, are invited to play key roles in operating the community farm. Brooks and Hodges envision the farm as a foundation for other educational efforts, outreach, and community-building. Another program will consist of cooking and gardening classes, monthly meals, diabetes prevention and healthy eating seminars, a farmers’ market, and a CSA. Hodges would like to see the farm serve as a sparkplug of sorts in transforming a food desert into a food oasis.

“The existing food desert is the most important part of why the farm is there,” Hodges says. “Our target is to sell food, with a farmers’ market on site.”

She hopes that Winter Street Urban Farm can also start a delivery service to area convenience stores, and she sees the commercial kitchen as a great place for food trucks to prep before making their rounds.

“Our goal is to be a thriving business,” she says. “We just want to bring the community back and break down barriers. We believe in giving back to our community.”