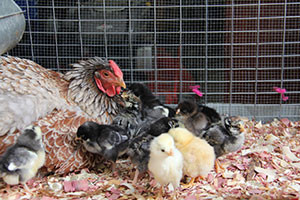 At a farm in Northport, Michigan livestock are feasting on a diversity of food scraps every day. One day it might be salad remnants and pizza crusts, another day it might be leftover soup.

That’s because a nearby public school has instituted a food recovery program in which all leftover food scraps are diverted to feed  chickens and pigs at a local area farm. Food waste, or as local livestock farmer Laura Cavendish of Lord and Lady Farm calls it, “school food slop,” that once headed to a landfill is now recycled back into the food chain as animal feed.

The Environmental Protection Agency lists feeding animals as one of the top priorities (after reducing the volume of surplus food generated and feeding the hungry) in its Food Recovery Hierarchy, a system of recommendations designed to cut down on America’s food waste problem.

Northport school board member Nancy Peterson’s efforts to divert wasted food at the school to feed livestock at local area farms, stemmed from a series of seemingly unrelated events in her life. First, there was the neighbor who began eliminating all trash from his home. Then, Peterson read about how one third of all food produced in the world ends up in the trash; that’s the equivalent of squandering about $400 billion annually.

“Something that’s bothered me for a really long time is restaurants and schools and people who throw out so much food,” says Peterson, “I started becoming more aware of that when we got chickens.”

With her chickens, she began a test pilot of the program in her own backyard. In addition to her normal composting, she started giving leftover food scraps to the animals. Being able to prevent more items from ending up in a landfill, became one of her favorite things about having chickens.

To scale up her program and have an even greater impact on curbing food waste in her community Peterson approached Lord and Lady Farm, a local livestock operation, about forming a partnership with a local school to utilize its food waste as animal feed. Both parties agreed to build the program and the local school added a new recycling bin to the cafeteria for food scraps that students would otherwise have thrown in the trash.

Now, every day, about 50 pounds of food scraps are bagged and brought outside the school where someone from Lord and Lady Farm picks them up to use as animal feed. That’s around 350 pounds of food waste per week that no longer heads to a landfill.

Peterson has ambitions to expand the initiative to other businesses in her community.

“I’d like to have a system set up for the local restaurants to arrange for local farmers or people who want to compost to have a way that that food gets picked up and used, instead of going to the dump,” says Peterson.

Peterson points to other programs in the area and nation that are on the same track. The West Michigan branch of Feeding America annually provides about 60 tons of food waste to farmers and animal sanctuaries across the state, she says. On an even larger scale, MGM Resorts in Las Vegas sends upwards of 7,000 tons of food waste a year to a nearby pig farmer.

Peterson will continue to work to make an impact in her community and she hopes, business by business, to contribute to the Waste & Resources Action Programme goal of reducing food waste by at least 20 percent by 2030.