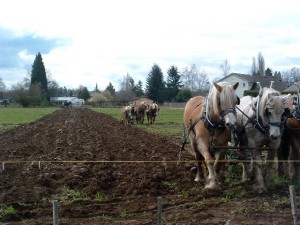 Located in Pierce County, Washingon, Mother Earth Farm is founded on land that has been passed down through generations of women. And now the farm works to inspire new women to join agriculture through its educational program for incarcerated people.

The farm is an integral part of the Emergency Food Network, a nonprofit that aggregates and distributes large amounts of food from the federal government, private donations and grocery surpluses. The organization also leverages its purchasing power to maintain adequate supplies for 73 area food banks.

“We generally work with the same nine women from March through November, although sometimes a woman will be released before the program ends and occasionally the same woman will come through a second year,” explains Moran. “We have no pick as to who comes through, but they have to have taken horticulture within the prison system and have graduated from an organic agriculture class. They are vetted by prison administration before they start.”

Moran graduated from Scripps College in Claremont, CA with a degree in Gender and Women’s Studies. It was there that she worked with a local correctional facility for women and assisted in starting an organic garden for the site. Moran continued her agricultural education for a number of years through WWOOF programs before settling in at Mother Earth Farms.

“It is incredible getting to work with these women and hear their stories,” she says.

The inmates learn to fulfill most of the primary tasks on the eight-acre farm site, from landscaping, planting and harvesting to packing and distribution. The educational program also includes a personal project for the women involved, which could be anything from creating a value added product to starting an animal system.

The women commute from the prison daily on Monday through Thursday and receive payment for their work, as well as a certificate in organic agriculture from Tacoma Community College. Educational speakers visit each week in spring to teach about topics like farm incubators, lacto-fermentation or canning foods.

“There are some challenges involving the traditional strife around using prison labor on farms,” says Moran. She notes it has also been challenging to satisfy the educational component of the program while satisfying the labor requirements for the farm.

“Six hours a day is not enough to get work done on the farm and educate the prisoners,” she says. “If it’s foggy out, the women can’t come and if someone is sick there is no replacement.”

Mother Earth Farms manages intensive, year-round agriculture with five tunnels, a 15-year-old orchard and another orchard planted two years ago. There are both annual vegetables and perennial systems at the farm. The farm uses municipal compost as a primary fertilization input.

Although they are not certified organic, Mother Earth Farms implements organic practices. The land was farmed conventionally for several generations, having been passed along through matriarchal lines until Doreen Johnson leased it to the Emergency Food Network in 2000 for the purpose of growing for area food banks. She leased the land for $1.00 a year until her recent death. The land is expected to continue functioning in it’s current capacity indefinitely.

“There seems to be more interest this year among the women to continue in agricultural fields after release as we place a greater emphasis on opportunities in agriculture,” Moran says. “We have seen some of the graduates find jobs in nurseries or small organic fields nearby. It’s great seeing their interest light up.”