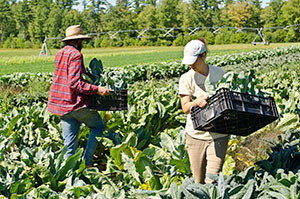 A group of Maine food producers, service workers and community members is out to change the local food system on an institutional scale.

The Maine Farm & Sea Cooperative is the first “farm and sea to institution” food service cooperative in the United States. Comprised of more than 100 owners, the group aims to transform the state’s institutional food service programs—like those in schools, universities and hospitals—by providing a higher percentage of local foods and employees to its partners.

“We are trying to build a coop approach across the food system here in Maine,” explains board member Jonah Fertig. The venture is a collaboration between farmers, fishermen, food producers, processors, distributors, and food service workers.

“This is key—building a broad base of cooperation to have a resilient, sustainable food system that benefits our economy and environment. We need to build that together.”

That’s a different approach than what has been seen so far in Maine, even though, of course, there are plenty of noteworthy collaborations happening throughout the state. Maine Farm & Sea’s mission, however, takes the coop concept to a new level of formal structures, according to Fertig.

“This has the potential to transform institutional food service here in Maine and be a model for rest of the country as well,” Fertig says.

Maine Farm & Sea was brought to fruition by a combination of sponsorships, city and federal grants, and donations from businesses and private citizens, many of whom have deep roots in the Maine food system.

The coop formed in early 2015, and in November, put in its first big bid for the University of Maine’s dining services contract. The University has contracted with Aramark—a global food management company based in Philadelphia—for the past 19 years. The University of Maine system has committed to using 20 percent local food in its dining services by 2020, but Fertig says Maine Farm & Sea could exceed this standard in the very first year.Also, the partnership would be good for economic reasons, Fertig says.

”If we are awarded this contract, we will bring as many of those Aramark workers into our coop as possible, and offer them better wages and benefits than they are currently receiving, as well as the opportunity to become owners of the coop,” he explains. “We want to see them continue to have a job in a new way, with respect and dignity as potential owners and having their voices heard in the governance of the coop,”

According to Fertig, all upper-level administration of the Aramark contract happens in Philadelphia. He hopes to bring those jobs back to Maine.

Keeping those jobs local, according to Fertig, means administrators would have more direct contact with producers and food service workers, as well as a shared stake in the Maine food system.

“That’s a key component—developing a greater sense of governance between management and workers,” Fertig says.

Whether or not the coop is awarded the University’s dining services contract, they are moving ahead full steam. Fertig says they are already discussing opportunities with several other state institutions as word gets out through its members’ existing connections. The cooperative is open to working with organizations outside of Maine as well.

“We want to build a company that promotes partnerships with local food systems, so we can use the purchasing power of universities, schools and colleges to transform our food system,” Fertig says. “We are looking to give a fair price to institutions, but also to the farmers and producers.”