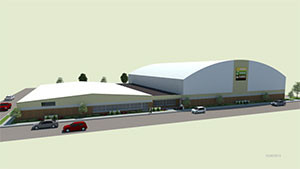 Deep in the corn belt, South Bend, Indiana may become home to a new indoor farming facility that would not only produce food but also educate community college students about indoor agriculture.

The proposed 20,000-square foot vertical farming operation would be constructed and operated by Green Sense Farms, headquartered in northwest Indiana.

A panel discussion, during which the proposal was put forth for the indoor farm and farm-college partnership, took place in October at South Bend’s Ivy Tech Community College. If the college’s Board of Trustees grants approval, Green Sense Farms is set to spend $3 million to construct the facility on land leased from Ivy Tech. The Indiana Commission for Higher Education must also give a nod to the project.

“The community meeting was well-received,” says Robert Colangelo, founder of Green Sense Farms. “Our last hurdle was holding a public meeting—there was no opposition. I anticipate final approval by December.”

This relationship between Green Sense Farms and Ivy Tech was born when Colangelo received an award from Ivy Tech College Northwest’s Society of Innovators in 2014. Colangelo met the chancellor of Ivy Tech, Thomas Coley. He’d expressed interest in partnering with other colleges, but kept running into obstacles. With Ivy Tech, it was different.

“He (Coley) learned about us, visited the farm, and was fascinated,” Colangelo says. “While other colleges were bogged down in bureaucracy, the chancellor was progressive and open-minded.”

Colangelo and Coley envision a Green Sense Farms facility in South Bend that offers hands-on learning for students who are interested in pursuing careers in sustainable farming.

“We see Ivy Tech as a great bridge,” says Colangelo. He’d like to create an internship program through the college.

This collaboration, if finalized, won’t be Green Sense Farms’ first foray into higher education. The farm has also worked with Indiana University South Bend (IUSB) to offer a course titled “The Art of Sustainability”. The class resulted after IUSB director of sustainability Mike Keene asked Green Sense Farms to join in an educational effort. The course is taught by a professor who specializes in geographic information systems and sustainability. One of the outcomes of the course will be a mural on display at Green Sense Farms’ location in Portage, Indiana.

These educational pursuits are part of Green Sense Farms’ broader strategy of looking to the future, one that Colangelo says will depend more upon precision farming and year-round growing. He says indoor growing facilities placed where people eat benefits not just local areas, but the entire country.

“We help California lettuce growers in a pinch by putting farms at points of consumption,” he says. “The best place to put these farms is at the point of distribution.”

The future of vertical farming, according to Colangelo, will consist of non-GMO (genetically-modified organism) seeds that grow under LED lights. And more indoor agriculture operations such as these will require farmers who are well-versed in the technology they require. Colangelo and Cooley are hopeful that a joint effort between Green Sense Farms and Ivy Tech will provide this type of education.

Women in Food: Nance Klehm on Writing, Farming, and Teaching for Soil Health