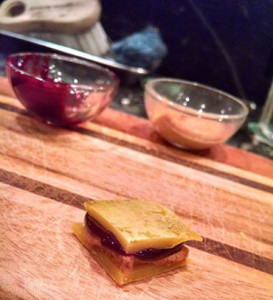 Sixteen-year-old Noah Kopf recently embarked on a challenge to eat only foods he produced or grew on his own for 30 days. The name of the challenge was appropriately called “Homegrown 30: A Month of Backyard Eating.” Kopf was successful – and while he says he found the challenge trying at times, he learned a lot during his journey.

Kopf first became interested in local agriculture about five years ago. “My family got a CSA at a local community farm and part of the requirement for the CSA is a certain amount of working volunteer hours,” he says. “My mom would bring me over after middle school and I helped weed the beds and pick stuff. I really enjoyed the work. I thought it was really cool that people were growing so much food right around us.”

Kopf began to farm whenever else he could, too – he joined farmer camps and began working at a local eastern Massachusetts youth farm called The Farm Project. Once Kopf began attending Newton South High School, he started working at the school’s farm in Newton, Mass.

While working at the 30-acre Farm Project, Kopf was talking with his co-workers about the amount of produce farm was producing. He wondered if he and his co-workers could survive solely on produce from the farm for a year.

“That got me thinking about how much food a little farm like my school farm could produce,” he says. “I was wondering whether that could sustain someone for a week, or a year, or a month, and I decided that it might be a cool project to see if I could live off the school farm for a month.”

The idea was a win-win. Kopf says that during the summer, a lot of the produce at The Farm Club goes unused. So, this past summer, Kopf began harvesting the food from his school in preparation for his 30-day journey. He also read Barbara Kingsolver’s book, Animal, Vegetable, Miracle.

“That inspired to incorporate more self-sustainability into the project,” he says.

Kopf says the entire project was a great learning experience. During the 30 days, he learned how to make salt, peanut butter, and crackers.

“Making salt was definitely the most fun — it’s fun and easy to make salt — a lot of people are surprised to learn that,” he says. “I think my favorite thing I made was the tiny peanut butter and jelly sandwich at the end. I wish I grew more peanuts, which were a surprisingly successful crop in New England. I also enjoyed just filling up bucket after bucket of potatoes — that was really satisfying.”

While Kopf says he will continue to cook, he is happy he can use oil and other ingredients again.

“I wouldn’t say that any of the things I made were especially good or better than the things I made before, but I have been using a lot of local vegetables and local produce, as well as other things like oils and flour,” he says. “I think my cooking is now more inspired.”

Kopf also says he will continue to eat locally and sustainably.

“The number one reason I think eating locally and sustainably is important, and why I want other people to do so as well, is because of the environmental impact,” he says. “Just producing food takes so much energy. The system we have right now is just not sustainable. I think that rather than this massive, industrialized system, it would be much more holistic and efficient to have smaller communities with smaller centers of food production and consumption.”

Koph thinks this change would lead to a greater variety of food, and would bring back regionalized diets. He also thinks it’s important for people to be connected to their food source, and where it is produced and prepared.

“It’s good for communities and the health of individual people — I think it’s just an enjoyable thing in general to try to eat local. And cooking food when it’s local is fun, too,”  he says.

While Kopf’s 30-Day Challenge is complete, he wants to continue working in local ag. “That’s still my number one passion and hobby,” he says. Right now, Kopf is working with his school’s farm to help its first produce share succeed. “We have been selling produce to teachers — the teachers sign up, and we deliver throughout the week. That’s been a time-consuming project for me.”