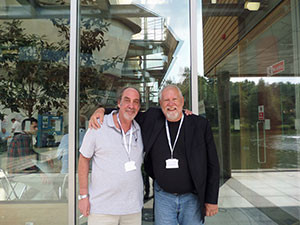 “I did not feel that the Growtainer was ready to sell,” he says. “I didn’t want to make promises or commitments to anybody. Lots of people don’t know what they’re getting themselves into—I would rather lose the sale because I’m honest.”

But with a new focus on the scalability and affordability afforded by the product’s Growracks, he’s ready to move forward.

A horticulturist and businessman, Behrman drew inspiration from PlantLab’s indoor farming efforts in Amsterdam, which motivated him and his business partner Alan Helene to develop growing systems inside shipping containers.

A pivotal moment came when Behrman spoke at the 2015 Indoor Ag Conference, which took place last spring in Las Vegas. He became reinvigorated about his vision regarding the Growtainer, and accepted that he was (and still is) on a learning curve. But rather than let that discourage him, he uses it for motivation.

“I’ve embraced that learning curve after making many mistakes,” he says. “It makes the project more fun.”

Focusing on economics and scaling, Behrman concluded that the most important feature of Growtainers are what is inside them—namely, Growracks. These are structures for plants that can operate within or independently of Growtainers. These stainless steel rack systems include LED lighting and can be adjusted for different height requirements of specific crops. Behrman envisions Growracks being used in restaurants to grow herbs and micro greens, and in schools to help educate students about sustainable agriculture.

“Growtainers need to be done in conjunction with the Growracks—it makes the business model more scalable,” Behrman says. “We took a good idea and put it in perspective. It’s not cost prohibitive. You can build a rainforest in a Growtainer and grow pharmaceuticals, nutraceuticals.”

Behrman is excited about the future of the Growrack system, which was designed for use inside Growtainers but can be used anywhere to grow plants.

“With Growracks, we’re poised to dramatically expand the market,” he says. “It’s an inexpensive solution for people to get their feet wet. With Growracks, people can grow produce in their home or office, and can help make the indoor agriculture industry more mainstream. The introduction of Growracks may be a game changer.”

Behrman and his cohorts are also working with a major supermarket chain to feature in-store produce from Growtainers. Growtainers have been sold in the United States and Europe, and Behrman is involved in collaborations with people from the United Kingdom, European Union and Eastern Europe.

Behrman says that Growtainers are innovative not because produce is grown inside of them, but because they are designed and built to allow growers to customize the environment for their target plants.

“I can duplicate any possible climate in a Growtainer, from a rainforest to frozen tundra,” Behrman says. “For agriculture, possibilities are unlimited.”

Behrman says he likes to surround himself with those he feels are smarter than he is—they include Columbia University professor emeritus Dickson Despommier, a pioneer in the field of vertical farming; Toyoki Kozai, a leader in indoor farming at Japan’s Chiba University; and professors and researchers at the Texas A&M AgriLife Research & Extension Center in Dallas, Texas, Growtainers are produced in Dallas.

Looking to the future, he foresees further innovation.

“If the biggest expense is power, then why not put Growtainers where power is cheap?” asks Behrman, who sees solar and wind energy as viable energy sources for the modular growing units. He believes Growtainers could also be located near geothermal areas, or could utilize excess water from a skyscraper’s air-conditioning runoff. The possibilities are endless.

While GreenTech Agro is not yet profitable, Behrman is also focused on a different kind of bottom line—fighting world hunger. He believes Growtainers, and the Growrack system, can be used as powerful weapons in this struggle.

“I don’t know if I’m helping to build an application or a new industry,” he says.