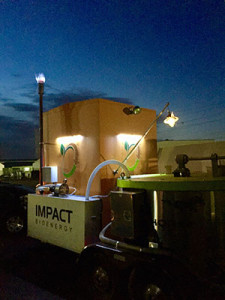 A newly minted portable food waste digester hopes to revolutionize small-to-medium scale kitchen operations in the Pacific Northwest and beyond.

The system, called HORSE (High-solids Organic-waste Recycling System with Electrical output), looks to fill demand for small, affordable food waste digester technology. Designed by Seattle-based company Impact Bioenergy  for use in campuses, restaurants and municipalities, the system uses biomimicry to process food waste into natural gas that can be stored for 24 hours.

The HORSE system can produce hot water, heat and electricity, and comes equipped with three kinds of odor control in the form of a biofilter, charcoal filter and an atomizing misting system. It also contains extra controls for fire pits and barbecues. According to Jan Allen, President of Impact Bioenergy, great effort was taken to make HORSE compatible with an urban environment. The unit boasts exterior lighting and a pleasing facade.

“Our mission was to develop a system that was complementary to rooftops and solar,” says Allen. “We took a page from Henry Ford and the Model T. Ford wanted to make his technology simple, affordable, high-quality and accessible. We knew of more than 30 companies developing large-scale digester technology. College campuses, individuals and restaurants wanted their own solution.”

Relatively few cities allow food waste to be composted with city yard waste. And where there is mass food waste composting, it relies on curbside pickup that burns fossil fuels. Often, unintended substances enter and degrade the quality of the compost. Once properly composted, biomass is then redistributed. For example, in Seattle, it is sold back to the public as Cedar Grove Compost.

HORSE cuts out the middle man, eliminates the need for hauling and redistribution, streamlines the composting system and creates off-grid energy. Food scraps create a rich biowaste that is difficult for municipal programs to compost effectively, says Allen. As a living system, HORSE will not digest toxins, plastics, metals or other substances that inadvertently end up in mass composting programs. The HORSE system also provides more nutrient-dense compost than municipal systems, according to Allen, as it relyies on enzymes rather than high heat to decompose raw material. Up to 90 percent of what comes out of HORSE is liquid organic fertilizer, coined “Rocket Fuel” by Impact Bioenergy. The rest is in the form of stored energy.

“You feed it a mixture of edible liquids, foods, napkins and paper towels”, explains Jan Allen. “Horse will process up to 135 pounds per day, which equals 25 tons a year. It is a small, controlled system, where you have a chance to pull out contaminants. If you put in cleaning products, bleach or something else that kills the microbes, the digester will shut down. It cannot tolerate things that kill the microbes.”

Allen says that the complexity of the system is comparable to owning a horse or a salt water aquarium. “There is some chemistry involved and the pH needs to be maintained,” he says. “You have to make sure the temperature is right and avoid adding plastic, glass or metal.”

Food scraps need to be reduced to one-inch pieces. The company is working on three separate machines that can be added to the HORSE:  a dry chopper, an industrial scale food processor and a meat processor.

The HORSE runs at 100 degrees Fahrenheit and utilizes naturally occurring bacteria in a way that resembles a sour starter used in bread baking. It’s an anaerobic system that retains every molecule of nitrogen input.  In an agricultural setting, a greenhouse can be used alongside the digester, taking full advantage of the perpetual generation of heat and fertilizer. The fertilizer can also be stored throughout the winter and added to crops during the growing season. It can even be added to an existing compost pile. Seattle Urban Farm Company has HORSE on site and is operating it as an educational component of their business.

“We can create up to 15000 BTU’s per hour in the form of natural gas,” says Allen of the energy production capacity of the machine. “A lot of our energy consumption is on a day/night pattern. Storing energy on a 24-hour cycle is valuable. With the HORSE it is predictable too, unlike wind or solar, where you may not have it.”