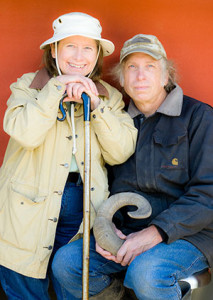 You’ve heard the term “black sheep of the family”—but Paonia, Colorado’s Oogie McGuire herds a flock comprised entirely of onyx rams, lambs and ewes. At Desert Weyr farm, McGuire raises Black Welsh Mountain sheep, a British breed from the mountains of Wales. They are the only all-black breed of sheep in the world.

It all started when McGuire, an avid knitter, set out to make a medieval Welsh cloak. “I got the sheep, a spinning wheel, and a loom; I learned to weave and made the fabric…however, my mental image of a medieval cloak was not historically accurate. I ended up making an 18th-century lady’s cloak,” she remembers. But by then, McGuire had fallen in love with the breed.

a McGuire inherited the farm when her mom passed away in 1998. After enjoying successful careers in software development, she and her husband decided to leave southern California; instead choosing to come home and farm the land where she’d grown up showing sheep and lambs at the local 4-H. “Mother had a large flock of mixed breeds—what we call a ‘spinner flock,’” explains McGuire. We kept the ones we thought we would like, and ended up culling everything but the Black Welsh. We had to like how they handled and how they behave; they had to taste good and have wool that I like to work with. The Black Welsh had all those qualities.”

McGuire’s original Black Welsh flock consisted of about a dozen animals. Then, she purchased several entire flocks that were being dispersed. Last year, the flock was 155 strong.

“We are either the largest or second largest flock in North America of purebred Black Welsh Mountain sheep,” says McGuire. “We go back and forth with a farm on east coast. We have about the same number of lambing ewes, so it just depends on where we are in the breeding cycle.”

Desert Weyr sells (but does not ship) meat, both as parts and whole animals. They can also ship breeding stock throughout the United States and Canada.

“We also sell manure, and horns [for traditional shepherd crooks, handles and buttons] from the butcher rams,” says McGuire, meaning almost nothing from the animals goes to waste. Right now, they’re pushing mutton—which, thanks to an initiative spearheaded by the United Kingdom’s Princes Charles, is enjoying a resurgence in popularity.

Even with sheep meat coming back en vogue, McGuire is ever-conscious of the responsibility that comes with stewarding the land she loves. “We are actually reducing the number of ewes we keep,” she says. “With land limited, we don’t want to expand any more.”

And, farming in the Rocky Mountains has other challenges as well. Even in this picturesque enclave of just 1,500 people, the effects of overpopulation can be seen and felt.

“The urban population often doesn’t understand the predator pressure that we are dealing with, says McGuire. “They see bears, wolves and coyotes as beautiful animals—which they are—but they never see the destruction that occurs. They pass laws without knowing how we protect our animals.” Which, at Desert Weyr, includes eight-foot fences and several guard dogs that protect the flock.

McGuire works hard to keep the legacy of her family farm alive, but stresses that recent numbers released by the USDA regarding the number of female farmers may be skewed.

“In any farming family, the people are part of the agriculture. Your name might not be on the title, but you don’t live on a farm and not work it,” she says. “The USDA goes on ownership and that is not always accurate. The other thing is that because of the way the government approves loans for small, minority and women-owned businesses, some farms are starting to switch ownership so that the woman has 51 percent ownership, in order to qualify for those government loans.”