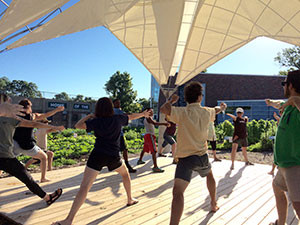 For the past seven years, the work of Growing Places Indy has evolved to include a winter farmers’ market, yoga classes, a summer apprenticeship program, educational offerings, and several urban farm sites.

The journey started with the Indy Winter Farmers Market, founded in 2008 by Laura Henderson, who now serves as executive director of Growing Places Indy. Created to give Indianapolis residents a year-round supply of locally-produced foods, the winter market operates from November to April inside the Indianapolis City Market in downtown Indianapolis.

“At the time there were no winter markets in downtown Indianapolis,” says Henderson. “Within the first month of operation, we knew we were on to something. There was not enough of a supply of local food to meet demand—this was our first ‘aha.’”

Then, in 2009, Henderson was given the opportunity to start a garden at White River State Park, located near downtown. Acting on her desire to farm in the city and connect people to where their food comes from, she jumped at this chance. At the time, Henderson knew only two urban farmers in Indianapolis. She connected with one of them, and together they procured a grant from the Indiana State Department of Agriculture to begin an internship program. Thus, Growing Places Indy was born.

As Henderson deepened her involvement in the city’s local food movement, she found that many others shared her vision–not just urban farmers, but advocates wanting to transform the food system.

Now, the entire operation is based on a philosophy of not just surviving, but thriving.

But before it reached that point, Henderson still had some inner work to do. While spending time in Europe with her husband, Tyler (who now serves as farm manager), she found herself comparing Indianapolis to places in Europe that seemed to have much more to offer. It was then she realized that positive change could emanate from her.

“I could be a victim of circumstance, or I could start something,” she says. “This gave me a kick in the pants.”

Growing Places Indy has helped develop a rooftop garden for Eskenazi Hospital in the city, and it now runs four different urban farms totaling 1.25 acres. Its urban growing locations include a U-pick site, greenhouse, and raised garden beds at the Chase Near Eastside Legacy Center; a slow food garden at White River State Park; a slow food garden at Cottage Home; and a public greens micro-farm on the Monon Trail.

In all, 60 varieties of vegetables, fruits and herbs are grown annually. This has not gone unnoticed by area eateries—39 restaurants in the vicinity of downtown Indianapolis use produce from Growing Places Indy, which, weather permitting, delivers food via bicycle.

But the growing and selling of healthy and local produce only meets the “grow well” and “eat well” standards. Growing Places Indy takes this further by educating people to “live well” and “be well.” A key avenue to meet this need is yoga.

“We incorporate yoga into all of our programs—this is part of my journey as a yogi,” says Henderson, who sees yoga as going hand-in-hand with eating well.

Donations for yoga classes are used to help under-resourced customers with SNAP benefits.

“We empower people with tools to lead full, abundant and thriving lives,” Henderson says, who is trying to meet an educational need in the city’s impoverished Near Eastside neighborhood. “In the Near Eastside, 40 percent of people live below the poverty line. Diet-related diseases are off the charts.”

Participants in Growing Places Indy’s apprenticeship program gain hands-on experience in all of its endeavors, including farm work, education, and fundraising.

Last year Growing Places Indy sold $70,000 worth of produce and is eyeing the $80,000 mark in 2015. But it wasn’t always this way. During its first year of operation, gross income totaled $3,000. A built-in advantage is that all its land used for farming is public or used through a partnership—therefore, land costs the organization nothing.

But profitability, while necessary for sustainability, is not Henderson’s primary motivating factor. Rather, she views her role as teaching people how to use local food (and yoga) to live healthy lives. She acknowledges this goes against the grain, especially in a state with so many corn and soybean farms.

“It’s easier to get the tractor out and work monoculture farms,” she says. “And it’s easier to go through life with blinders on, but miss out on relationships.”