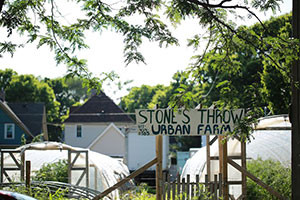 Since its inception in 2011, Twin Cities-based Stone’s Throw Urban Farm has converted 14 vacant lots in St. Paul and Minneapolis into mini-farms.

The project began as a collaboration between several  urban farmers in the Twin Cities area during the winter of 2011. The farmers began discussing how urban farming could become a viable business, relying on vegetable sales to support itself, while also providing education, improving the ecological health of the land and developing innovative sustainable agriculture methods.

Stone’s Throw associate Caroline Devany says these same questions still guide the organization’s work today. Stone’s Throw currently leases all of its plots from various types of owners, a situation which, by nature of its instability, can work to make the solutions to those questions elusive. But often, neighbors help create stability by stepping in to help the local farms. And Stone’s Throw is also exploring various options for securing longer-term land tenure, according to Devany.

“Some are privately owned, some are owned by a bank, or neighborhood development organizations,” Devany says. “We lease the land for free; we offer maintenance and general upkeep in exchange for use of the land. As such, most of our leases are short-term and conditional on the owner’s continued desire for us to use the land. We do pay rent for a few of our plots, on which we have somewhat longer-term leases.”

But getting stable land tenure is a challenge.

“It is a huge struggle to access land and maintain long-term tenure in an urban real-estate context,” Devany says. “Right now, most of the land available to cultivate in the city is the product of historic disinvestment and acutely the 2009 foreclosure crisis. We need to create more permanent opportunities to grow food in the city and ones that are accessible to all.”

And while Stone’s Throw is receiving more support from the cities it works with, it still faces issues with city bureaucracy.

“There is still a large amount of conversation to be had around how agricultural activity fits into zoning and building codes of a city,” Devany says. “Our neighbors are crucial supporters and advocates of our work.  They allow us to meter water from their houses, use their bathrooms, and let us know when our compost smells bad.”

The farm’s various plots produce over 50 varieties of vegetables, a dozen herbs, and a smattering of flowers.

“We primarily grow annual veggies because they are planted and harvested in the same year and do not require long-term land tenure,” Devany explains. “We hope to move toward growing more perennial fruits, nuts, and herbs in the future. We grow a mixture of heirloom (historically important, open-pollinated) varieties, as well as many robust hybrids.”

When Stone’s Throw’s workers begin to farm a new vacant urban lot, they often find the soil to be compacted, nutrient-deficient, and covered extensively with weeds or lawns, according to Devany.  So working and amending urban soil is a major part of production and yield.

“Given our geography, we specialize in growing space-intensive and perishable crops, such as arugula, salad mix, and spinach,” says Devany. “We are trying a few more experimental crops for our climate, such as ginger and turmeric.”

Devany says that Stone’s Throw has used a set of sustainable and organic growing systems since the beginning. The various practices include making compost by using brew waste from local breweries and wood chips from tree care companies in the city.

“We employ these practices because we want to subvert dominant modes of production that deplete the environment and destroy people’s bodies,” she says. “We apply this compost to our lots in about ten times the amount that an organic vegetable farmer might apply to a field outside of the city,” she says. “We utilize relatively low-impact tilling methods, so to not disturb soil structure and biological activity. We also use cover crops and crop rotation to support nutrient cycles and control pest pressure.”

Stone’s Throw is primarily financed through the sale of CSA shares, restaurant sales, and farmers’ markets.

“Our CSA and restaurant sales are managed by a new and immigrant producer’s cooperative we formed with three other farms in the 2014 growing season,” Devany says. “The co-op, Shared Ground, aims to help new and immigrant farmers gain access to market outlets,  and ultimately work to support farming as a viable livelihood.”

Currently, Stone’s Throw grosses about $55,000 per acre and produces more than $50,000 pounds of food each year. The owner’s and the five employee’s salaries are paid entirely through vegetable sales.

“Given the profit needed to invest in annual start-up costs, these salaries are not yet a livable wage,” Devany says. “Stone’s Throw employees make around $8 an hour and work 50-hour weeks during the season.”

In the years to come, Devany would like to see Stone’s Throw become a more financially sustainable project, advocate for broader land access in the city, and confront structural racism and other inequities that exist throughout the food system economy.

“Our food system has historically been dependent on exploitative labor practices and economies, which has made food much cheaper,” Devany explains. “We would like to be able to pay ourselves livable wages, but are limited by much larger issues of the structural economy.”

Women in Farming: Cyndy Beck and Judy Dauson on Returning to Farming and the Food Movement