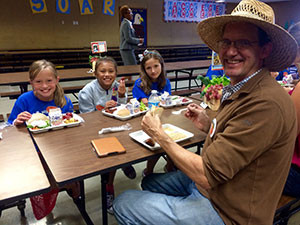 It started small, with 20 elementary schools eating fresh local lunch every Thursday. Now, San Diego Unified School District’s farm-to-school menus are being served up at over 220 schools in the district to 132,000 kids. The ultimate goal is to have all 26 million meals a year be fresh, local and made from scratch, and district officials believe it can be done.

“We were able to grow the program rapidly,” says Tara McNamara, marketing coordinator for the district’s Food and Nutrition Services department. “We started last October at 20 elementary schools, and that expanded to 60 by the end of last school year. Now we’ve got 225 at the beginning of this year.”

The California Thursdays program, part of a district initiative that includes meatless Mondays and school gardens, is a collaboration with the nonprofit Center for Ecoliteracy. It’s all part of a larger picture, California Food for California Kids that the center believes can serve as a national model for healthier cafeteria eats. 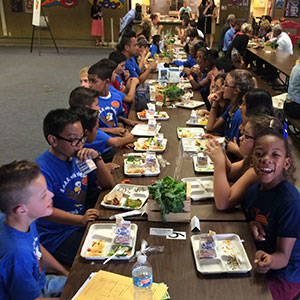 San Diego, McNamara says, has a natural advantage.  “Not only are we blessed to be in California, but San Diego County has the highest concentration of organic farms of any county in the United States. The variety is incredible. We get to work with farms of all sizes; for example, our November Harvest of the Month item is persimmons purchased from Sahu Subtropicals, a 60-acre farm in Fallbrook, California. We get our kumquats from them too.” The district spends around 5 million a year on produce.

The new food choices, she says, are a big hit with the kids. “The students have been very receptive. They can tell when they’re getting fresher food. We do tastings; just recently we visited a high school and a couple of the football players came by and tried our chicken drumsticks, a signature entrée. They were amazed.  ‘Really? We can get this in school?’ And that’s typical. Kids and families are responding well.”

Besides happier, healthier students, the district is mindful of other potential benefits for the entire community. “Not only does this help students to know where their food comes from and develop healthy eating habits, but we’re also helping the environment and the local economy,” says McNamara. “We develop close relationships with our vendors and work with them to make sure everything meets the federal standards set by the Healthy, Hunger-Free Kids Act. “

The logic behind California Thursdays, according to the Center for Ecoliteracy, is to start with attainable goals: “The goal of serving one freshly prepared meal per week is an achievable step,” notes the CEL on its website. “At the same time, it requires changes throughout nutrition services operations.” The California Food for California Kids program began with a pilot in 2013-14, rolled out in 15 districts in 2014, is in place in 42 this fall and is expected to expand even further in spring 2016.

In San Diego Unified, students are involved in the menu selection process through focus groups and taste tests, work in the school gardens, and can view menus on an app called Yum Yummi that keeps them up to date on the latest choices from the “Kids Choice” and “Sandi Coast” cafes – items like the Strawberry Sun Sandwich, which combines local strawberry jelly and sunflower seed butter on star-shaped whole grain bread, or mac and cheese with whole grain noodles and local cheese.

It’s far cry from the lifeless canned veggies and mystery meats most of us remember eating in the school cafeteria in the latter 20th century, and the Center for Ecoliteracy assists districts with marketing and communications materials to help get the word out. As far as McNamara and her coworkers are concerned, it’s an idea whose time has come.
“I think this is what school nutritionists across the nation are trying to get back to,” she says, “and San Diego Unified is proud and happy to be a leader. Our next big transition is to get back into scratch cooking. We found these terrific Rationale ovens that allow for cafeteria-scale scratch cooking, and we don’t have them in every building yet, but we’re working on it. And the better we make it, the more the kids love it.”

Women in Farming: Cyndy Beck and Judy Dauson on Returning to Farming and the Food Movement