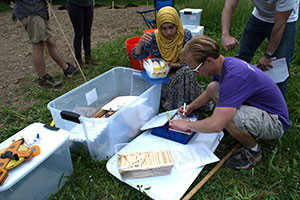 Increasingly, cities are becoming viable places to grow food. But many cities tend to have more polluted soil than do rural areas. How does this affect the safety of food grown in urban settings?

A study conducted by Wayne State University in Detroit is attempting to answer this question. The study’s co-principal investigators are Lawrence Lemke, professor of geology; and Yifan Zhang, professor of nutrition and food science.

Research is taking place at two urban farms in Detroit, including Earthworks Urban Farm, and an urban farm in Auburn Hills, a Detroit suburb.

According to Lemke, soil pollution in many northern post-industrial cities like Detroit is the result of two legacies. First, soil deposited by glaciers many millennia ago naturally contains nutrients and a variety of naturally occurring metals such as arsenic. Second, soil that contains industrial residue from transportation, manufacturing, and other types of industry may also be contaminated..

Lemke also points to the days when cars used leaded gasoline. He says, this led to rainfall events that deposited lead on wide swaths of ground in urban areas.

And polluted soil can lead to contaminated plants, according to Lemke. For example, wind and rainfall can move soil to leaves of plants, which can lead to people ingesting polluted dust.

Interestingly, there were major differences and variability of results, depending on the specific square meter sampled. The “alert” point for lead pollution, for instance, is 400 parts per million. Some areas were below, and some were above. Areas of soil with lead levels more than 400 parts per million would need to be addressed, Lemke says.

“This is not a random pattern,” says Lemke, who emphasizes the importance of finding out why certain areas of soil have more metal contamination than other areas in the same plot of land.

Lemke also stresses that different pollutants in soil, such as zinc and arsenic, can act differently. He expects further study results to reveal more about this.

“We deal with different metals, which behave in different ways,” he says.

The research study is ongoing, and Lemke would like to find out how metals and other soil contaminants impact soil bacteria population and behavior.

“We still have dozens of questions,” he says.

Lemke’s advice for urban gardeners is to start with a basic soil test. If results show high levels of contaminants, then further soil sampling and remediation may be necessary.

A recent article co-authored by Lemke in the January 2014 issue of Risk Analysis magazine illustrates that a city’s urban agriculture system is dependent on the health of its soil.

“Risks associated with exposure to contaminated soils or garden produce are increasing as urban agricultural activities gain popularity throughout industrialized cities. In Detroit, Michigan, USA, the urban agriculture movement has received considerable attention as a means to provide a source of healthy, locally grown food while contributing to the city’s economic recovery. In Detroit and other postindustrial urban areas, the ubiquitous nature of lead as a diffuse anthropogenic contaminant increases the challenge of finding suitable places to grow food.”

The team of researchers received almost $300,000 from the USDA National Institute of Food and Agriculture. Further study results are expected to be released in late 2015.