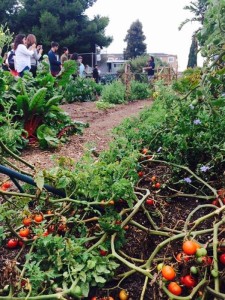 Los Angeles County’s blighted areas and abandoned lots could be seeing more green in the near future.

On September 22, 2015 , the L.A. County Board of Supervisors approved an Urban Agricultural Incentive Zone Program  (also known as a Tomato Garden Tax Break). If implemented, the policy has the potential to transform vacant and privately owned land in the county into urban farms, and help reduce blight and illegal dumping throughout Los Angeles city and county.

In addition to adding more green space, the “tax break” also would create local jobs in urban farming and support food security and access. The details of the program still need to be worked out to make it reality.

“Eligible properties would be assessed based on the statewide average irrigated agricultural land rate, which in 2014 was $12,500 per acre,” Karly Katona, senior deputy for environment, transportation, and community development at the Office of L.A. County Supervisor Mark Ridley-Thomas, says.

According to Katona, the program will allow local jurisdictions with populations over 250,000 to offer a reduced tax incentive to private owners of vacant land who commit to long-term commercial or non-commercial agricultural uses of their property.

“The city and county of San Francisco were the first jurisdictions in the state to implement the UAIZ program on July 29, 2014,” she says. “The County of Los Angeles must take the lead in establishing a program for the 10 million residents that live in unincorporated areas or one of the 88 cities in the County to be eligible for the program. Individual cities must also ‘opt-in’ for their properties to be eligible.”

In addition to eliminating vacant spots throughout the city, Katona adds, the program has the potential to help reduce food deserts in Los Angeles County. According to Katona, there are many corners in L.A. County where low-income individuals and families do not have easy access to high-quality fruits and vegetables.

“The idea is to support existing and emerging gardeners and farmers,” says de la Vega. “That means more land for urban farmers to cultivate food, build healthier soils, and create more access to fresh, nutritious foods. If passed, we expect to see the expansion of several community gardens and urban farms into new or larger operations, and we expect to see vacant lots that currently are eyesores in their neighborhoods be re-purposed into more community-serving uses.”

According to de la Vega, in one growing season, a 10 x 10-meter plot can provide most of a household’s total annual vegetable need. She notes that every dollar invested in a community garden plot yields approximately $6 worth of vegetables.

“By promoting urban agriculture, the city and county can provide another opportunity for low-income households to save on food dollars and contribute to overall community food security and resiliency,” de la Vega says. “By improving access to land at more affordable rates, we expect to see more entrepreneurs taking bolder steps toward urban farming as a viable social enterprise.”

The program has the support of community constituents, food enthusiasts, and elected officials the city and county level, according to de la Vega.

“The Urban Agriculture Working Group of the LA Food Policy Council has been focused on passing an Urban Agriculture Incentive Zones at the city and county level, and we are thrilled that the county Board of Supervisors passed the bill unanimously,” de la Vega says. “We are optimistic that the economic, environmental and equity benefits of the bill, as well as the dedication and enthusiasm of such a wide range of stakeholders, will persuade the city to do the same.”

10 Days to Go Until the 4th Annual Seedstock Conference: Innovation and the Rise of Local Food