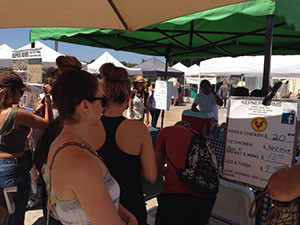 The last decade has seen nothing short of a bonanza in farmers’ markets in America. Between 2007-2014, the number of farmers’ markets in the U.S. has grown by nearly 180 percent, according to a January 2015 USDA report. That’s accompanied by a 288 percent growth in regional food hubs and 430 percent in farm-to-school programs.

But the data also show that while food hub sales continue to climb, sales at farmers’ markets may have peaked.

So can farmers, especially ones who operate on a small scale, make enough money at farmers’ markets to make it worth their while? Or is the proliferation of farmers’ market we’ve seen over the last decade coming to an end?

“It depends on the farmers’ market,” says Arthur Neal, deputy administrator of USDA’s Agricultural Marketing Service Transportation and Marketing Program. “Every place is different. It depends on how well people are working together to make it successful.”

The GrowNYC Greenmarket Program works with 240 producers and operates 54 farmers’ markets in the New York City area. Its director, Michael Hurwitz, says successful farmers’ markets do much more than just offer local foods. And market vendors must be good at many things beyond providing produce.

“Being in direct retail is a very difficult job. What you grow has to be interesting, and it has to look good,” says Hurwitz. “Farmers also have to manage logistics and provide good customer service. You need to be good at all of it. You have to be able to sell your product. Don’t let someone walk by your stand without saying ‘hello.’”

Hurwitz also encourages farmers to look at all of their selling options—not to limit themselves to farmers’ markets.

“Farmers’ markets are an important financial engine for farmers, but not an end-all,” he says. “It should not be either-or (farmers’ market or CSA). A CSA provides cash flow—choice is healthy.”

Neal has seen an increasing number of grocery stores promoting and cooperating with farmers’ markets in recent years.

“The goal is for farmers to expand and grow,” he says. “CSAs, food hubs, farmers markets—all are integral parts of meeting consumer demand for local foods. You can’t get everything at a farmers’ market.”

Ben Hartman, owner and operator of Clay Bottom Farm in Goshen, Indiana, says he wouldn’t sell at the Goshen Farmers’ Market if he didn’t make money at it. But not all farms will go the distance, he says. Hartman sees farmers’ markets as business incubators and proving grounds for farmers.

“Small startups can test out their product,” he says. “Some businesses are hits; others won’t take off. At the Goshen market, we see vendors come and go frequently.”

Hartman cites one of the most common ways for farmers to fall short of profitability: undervaluing their products. This can be a fatal mistake.

“For many beginning farmers, undervaluing what they sell puts them out of business,” he says. “It’s often a race to who can charge the least. It’s important that farmers charge fair prices—customers want to support farmers who sell local food, as this is a service they provide.”

Many factors come into play in determining profitability levels of farmers’ markets and their vendors. Some of these factors, according to Neal, include farmers’ abilities to engage customers, location (urban or rural) and demand, having the right product mix, the amount and quality of value-added offerings, and whether or not the market participates in SNAP (Supplemental Nutrition Assistance Program).

One of the easiest ways for a farmers’ market to boost profitability, according to Neal, is to accept credit and debit cards.

“Don’t be afraid of technology, don’t miss out on plastic. Embrace technology to be attractive for kids.”

In addition to the USDA national aggregate study mentioned above, it’s important to examine impact to the local economy. Because farmers’ markets keep money local, and because vendors can retain 100 percent of their profits, a local economic impact can be quite robust.

One such example is Audubon Park Community Market in Orlando, Florida. A 2013 economic study by marketumbrella.org calculated the economic benefit of the market for its vendors and nearby businesses, and found that the Audubon Park Community Market had an overall economic impact of $960,561, based on an economic multiplier effect that takes into account the value of direct-to-consumer sales.

Because farmers selling at this market were able to keep 100 percent of money earned (as opposed to 19 percent for farmers selling at grocery stores, according to the American Farm Bureau Federation), that economic benefit was drastically amplified. Even though the market’s 2013 gross receipts totaled $337,562.88, the overall economic benefit to market vendors was about double this amount based on the multiplier.

A Launchpad for Small Farmers

“For small farmers, they are the best place—they make double per pound what they would make elsewhere,” she says. “Without a farmers’ market, these businesses would never have a place to launch from.”

Grove also serves as program coordinator of Fleet Farming in Orlando, a coalition of “farmlettes” and community gardens that deliver food via bicycle.

“We (Fleet Farming) sell lettuce at East End Market, and we make double what we can make anywhere else in town,” she says.

But capitalizing on that opportunity means farmers’ markets need to compete with grocery stores, CSAs and the like to maintain that opportunity, according to Violet Stone, a small farms program coordinator at Cornell University. While Stone is is optimistic about the potential of the profitability of farmers’ markets, she says she often sees that potential go unrealized.

“In the beginning, small farmers were just so happy to get their dollar back,” she says. “But many times investments were never made to farmers’ markets, and, as a result, many of them have little infrastructure.”

Stone points to increased competition with other producers. She notes that grocery stores (which have restrooms and running water) have now incorporated many of the attractive aspects of farmers’ markets.

“Farmers’ markets are great for beginning farmers,” she says. “But they need more investment in infrastructure. I would like to see more farmers’ markets elevate the position of market manager to a paid, professional position.”

Focus on Farmers, Food and People

“Some farmers’ markets don’t host farmers, but mostly food vendors and arts-and-crafts people,” De León says. “The key is that if you make farmers the main attraction, farmers’ markets will be profitable.”

But for Lisa David, market manager of the Orange Home Grown Farmers and Artisans Market in Orange, California, the main focus of a farmers’ market should not be financial profitability. Instead, she looks at the triple bottom line, which takes into account not only money but benefits to people and the environment.

“The core of what we’re doing is building community,” she says. “It’s an important tool to bring people together.”

Farmers who help do this will be profitable, she feels—but this is just a byproduct of deeper success.

It also helps when farmers’ market vendors offer something that grocery stores don’t.

“Some farmers can grow unique varieties,” says David. “They’re not just selling celery and carrots, but golden beets. Those farmers do well.”