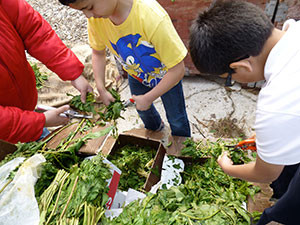 The Ground Rules, a Chicago farming project of Social Ecologies, is one of many urban farms and community gardens in the city that will benefit from Chicago’s new compost ordinance. (Photo courtesy of Nance Klehm)

The Windy City took another step toward sustainability on July 29, 2015 when Chicago’s City Council approved a new compost ordinance.

The new regulation will allow community gardens in Chicago to compost various types of organic waste, including food scraps such as vegetables and eggshells. Previously, only landscape waste was permitted for compost, such as grass and shrubbery clippings.

Formerly, community gardens and urban farms were only allowed to compost items that were produced on-site. Accepting donations of food scraps was not permitted, and permits were required for all compost containers measuring more than five cubic yards.

Under the new ordinance, compost containers can measure up to 10 cubic yards without needing a permit. And farms generating less than 4,000 tons of compost annually will only have to pay $300 for a permit, as opposed to the previous fee of $3,000.

The ultimate goal of the ordinance is to expand the type of permitted compostable materials at urban farms and gardens throughout Chicago, while implementing measures to ensure that public health standards are met, according to according to Jennifer Walling, executive director of the Illinois Environmental Council.

Several of local urban agriculture organizations helped draft the ordinance.  Chicago has been behind other cities leading the way in urban agriculture, according to Walling.  (The Illinois Environmental Council was one of 20 groups spearheading this effort). But she believes this ordinance helps Chicago progress by leaps and bounds in fostering a culture friendly to urban farming.

“New York City is doing well with this, but the City of Chicago’s ordinance is even better,” says Walling. “Chicago should become tops in the nation.”

Now that the ordinance has passed the Chicago City Council, it is now in the rulemaking phase. This means that agencies, such as the Chicago Department of Public Health, work to add detailed regulations to the ordinance. Walling expects the rulemaking process to conclude by the end of October or early November, with the entire piece of legislation officially taking effect in time for spring gardening season.

Currently, the state of Illinois has an amalgam of composting rules. With the exception of Chicago and its suburbs, most of Illinois is rural. Due to a state statute, rural farms are exempt from composting regulations, and Chicago’s suburbs have a variety of composting laws. Walling hopes the new city ordinance will serve as an example to other Illinois cities and towns.

“The City of Chicago will be a good test case; this is a great first step,” she says.

Walling predicts the ordinance will prove beneficial to urban farmers in the city, and will improve soil health.

The ordinance is part of Chicago’s effort to support urban agriculture in the city. In 2011, the administration of Mayor Rahm Emanuel passed an urban farm ordinance, which expanded the size limit of community gardens and allowed for more hydroponic and aquaponic operations. Since that ordinance passed, acreage in the city devoted to urban farming grew from 1.4 acres to about 18 acres.

“The city now has one of the best ordinances in the country,” Walling says. “It provides more options and opens up compost sites to the community.”