Fish Atop a City Rooftop in Brooklyn Power Farming Startup 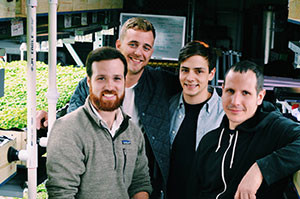 On top of a former Pfizer building in Downtown Brooklyn fish and produce grow together in a symbiotic system. The rooftop venture VertiCulture Farms, established in 2012, is an indoor aquaponic farm that offers fresh produce and fish to the surrounding area through several sales channels. The founders hope their rooftop farm model will illustrate the potential of aquaponics in cities.

“We’d heard about hydroponics and aquaponics before, and thought we’d give it a shot,” says Ryan Morningstar, one of the cofounders of the startup based in Brooklyn, New York.  “We set up a small installation on the rooftop of the Metropolitan Exchange Building in downtown Brooklyn with recycled materials. We put a system together, got some tilapia and we saw that it worked.”

Founded by four friends — Miles Crettien, Jacob Hill, Ryan Morningstar and Peter Spartos — VertiCulture Farms specializes in growing produce vertically with tilapia tanks underneath. A fish waste receptacle known as a “fish waster” provides the nutrients the plants need in a closed-loop system. Both the produce and the fish will eventually be offered for sale, although the fish aren’t quite big enough yet. According to Morningstar, the tilapia is currently cheaper to import from China.

“The majority of what you get is coming from overseas and is not getting fed high-quality food, is treated poorly, processed and sent over frozen,” says Morningstar. “You can produce a lot of food in the city, the freshest fish you can get. It’s not coming off a boat and traveling overseas; it’s being grown on your rooftop. We’re trying to rebrand it. And given the freshness, price point and nutritional quality we believe that people will be able to get on board.”

Learning from their prototype on the Met Building, the founders designed a modular aquaponics system that works indoors, utilizing vertical space. The current farm at the Pfizer Building will be running at full capacity in the next three months. Morningstar expects production rates to reach 40 pounds of produce and 12 to 15 pounds of fish per week.

Morningstar recognized the need for more space to expand the business and provide for customers that already want their produce.

“We don’t have enough food to sell to all the people that want it,” he says. The team is exploring expansion into a downtown Brooklyn warehouse facility with approximately 10,000 square feet and 22-foot high ceilings. Maximum production for fish at the new facility should be in the 15,000-pound range.

The goal for the young company is to sell through their website, to aggregation services, restaurants and grocery stores. They also hope to establish a line of clamshell herb products.

Morningstar says VertiCulture is a social enterprise startup. He wants to do more than build rooftop farms; he wants to build communities.

“One feature of our business plan is to develop a real community vibe around each one of our farms. We want to position ourselves in areas that don’t have great access to fresh, affordable local foods,” says Morningstar. “We want to give kids and even adults in the community jobs directly so they can feed into the community focus of the farm.”

Morningstar explains that sustainable startups are starting to attract the attention of savvy lenders, but that doesn’t mean startups should jump in with the first person to offer them a loan.

“They are going to look for growth immediately, and if you still have things to work out in your model, it’s going to end up ruining you in the long run,” says Morningstar.

Instead, he advocates a slow and steady approach.

“We feel like we’ve learned so much in doing it ourselves, taking the time to go through all the bits and pieces,” says Morningstar. “Piece by piece, grow your company slowly and wait until you are confident to take the big leap to move into a larger facility. We feel like we’re confident at this point to take that leap. It’s only because we took it really, really slow.”

For Morningstar, the importance of aquaponics is growing by the day.

““We think that aquaponics farming is going to be quintessential in the food system. Even in a place so rich in food production like California, they’re running out of water. We believe aquaponics is a solution for that,” says Morningstar. “In New York City there’s a demand for fresh local foods that just can’t be supplied based on the growing season. In the long run, we think that aquaponics is going to be a vital part of the food production in the United States and beyond.”