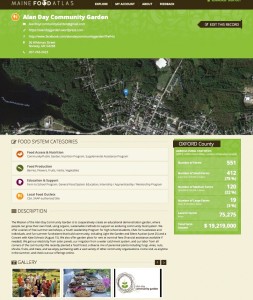 A food hub here, a farmers’ market there, and CSA’s both here and there—what is the best way to find local foods? In Maine, this question is being addressed by The Maine Food Atlas.

The Maine Food Atlas is an interactive website that lists local food assets in the following categories: food production, processing and manufacturing, distribution and storage, local food outlets, food access and nutrition, and education and support.

Currently, the site is in beta testing, but according to Stephen Engle, director of the Center for Community GIS (a collaborator of the site), it is about to come out of beta.

Engle emphasizes that anyone in Maine with a local food asset can add themselves to the site, which will undergo some improvements and enhancements during the next few months.

Morse sees The Maine Food Atlas as a natural result of a significant agricultural renaissance taking place in the state.

“In Maine, a significant agriculture revival is going on,” he says. “We’re moving and scaling up as a group, with all sorts of networks coming together.”

Some of these groups include the Maine Organic Farmers and Gardeners Association, Maine Farmland Trust, and Maine Food Strategy.

So far, according to Morse, The Maine Food Atlas is relying on word-of-mouth for more participation. This method has been working.

“Community food councils are adopting this as a component of their local work, along with schools and food pantries,” he says.

The goal is to have a site that gives users access to rich and varied content and information regarding local food resources in Maine (with growers playing a part by sharing their own names on the Food Atlas page).

Engle says that The Maine Food Atlas models similar efforts in other states, including the Vermont Food System Atlas and the Maryland Food System Map.

Even though The Maine Food Atlas has come a long way since its beginning and is coming out of beta testing, Morse says the work is just beginning. He has a vision of the site hosting a myriad of photos, partnering with other organization, and adding more capacity.

“There is a potential for partnership with many groups,” he says. “For example, maple syrup folks can pull relevant maps from the Atlas. There is huge potential over time with these partnerships.”

Engle would eventually like to see certain designated users of the site as moderators, along with regional site groupings. He also eyes a possible future collaboration with the Good Shepherd Food Bank, a prominent Maine food aid group.

Morse would like the site to feature listings of schools and colleges that are involved in the local food movement.

Regardless of how extensive the site becomes, both Morse and Engle know that keeping the Atlas up-to-date is of the highest importance—otherwise, it will become irrelevant.

In the meantime, they are both excited about the possibilities the site offers.

Startup funding for this project was provided by the Elmina B. Sewall Foundation, but now Morse and Engle are working to make the Maine Food Atlas financially sustainable. To that end, Engle says there is room for possible sponsorship revenue opportunities. This is important because Engle would like to keep the site free for users.

“There will be fewer people (as users) if there is a cost,” he says.