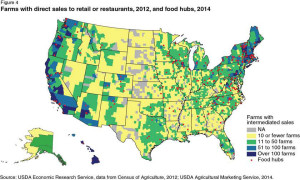 This map shows the number of farms with direct sales to restaurants and/or retail establishments as of 2012, and the locations of food hubs as of 2014. (image courtesy of Gary Matteson/Farm Credit Council)

Food hubs are viable businesses with bright futures, according to a recent financial study on food hubs.

The COUNTING VALUES: Food Hub Financial Benchmarking Study drew on financial and operational data from 48 of the more than 300 food hubs in the United States. The report aims to compare results within particular sectors to develop baseline performance statistics.

It’s also the first report of its kind to focus on food hub performance metrics. The report formally defines a regional food hub as “a business or organization that actively manages the aggregation, distribution, and marketing of source-identified products primarily from local and regional producers for the purpose of strengthening producer capacity and their access to wholesale, retail, and institutional markets.”

This study provides the first set of financial and operational performance benchmarks in a business sector that suffers from a lack of data,” says lead author Erin Pirro, a farm business consultant with Farm Credit East.

Benchmarks, as explained in the report, include:

Profitability—Most food hubs operate at close to break-even, with the highest performing 25 percent attaining a 4 percent profit margin. The most profitable food hubs are larger, older and for-profit.

Efficiency—Lower cost of goods sold and greater labor productivity seems to be a key factor in food hub success.

Management—Food hubs can use the benchmark data in the report to gauge their strengths and weakness and to improve on these numbers in the future.

One of the food hubs participating in the study was Firsthand Foods, a Durham, North Carolina-based sustainable meat marketing and distribution company. Firsthand Foods Co-CEO Tina Prevatte says that data in the report will help her company plan for the future.

“This study provides useful metrics that will allow us to more effectively track our progress in a brand-new industry,” she says. “We’re building something that is different from the traditional food industry. Slim margins and operating near break-even are signs of success when your intention is to make good food accessible to all while also paying farmers fairly and equitably.”

The report will also serve as an invaluable tool for businesses that lend money to food businesses, says Gary Matteson, vice president of young, beginning and small farmer programs and outreach with The Farm Credit Council.

“From a lender’s standpoint, it provides information to the lender about the food hub business, and it provides business metrics,” he says.

“Over time, RSF expects this study to act as a compass—a true north of sorts—revealing the operational trends that will validate an organization’s business model and path to self-sufficiency,” she says. “For funders, these trends will inform how we choose to support and capitalize this movement.”

The report shows initial benchmark data for a growing and changing industry, says John Fisk, director of the Wallace Center at Winrock International.

“The future of food hubs, like anything, will evolve,” Fisk says. “I think they will grow capacity in terms of opportunities. Local foods is an emerging sector and is not going to go away—food hubs will prosper in this environment.”

The United States Department of Agriculture also recognizes the need for viable economic data on food hubs, and as a result, recently released a report titled Running a Food Hub: Lessons Learned from the Field. This report, also the first of its kind, is designed to help food hubs plan for success, address challenges and achieve viability.

Local Food and Its Importance to Wholesale Distributors