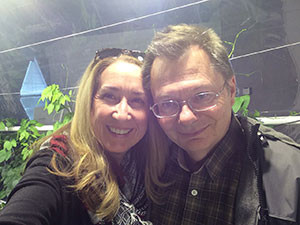 Jacklyn Green and Roger Kern, spouses and cofounders of Agate Biosciences, have made it their life’s work to pursue growing food on the Moon and Mars. (photo courtesy of Roger Kern)

Scientists Gene Giacomelli, Jacklyn Green and Roger Kern say that among the many reasons to pursue agriculture on the Moon and Mars is what will be learned to improve sustainable food production on Earth.

“What we learn from being able to grow up there has benefits that we can use to improve agriculture on Earth, as resources become more limited,” says Giacomelli, director of the University of Arizona Controlled Environment Agriculture Center.

“Everything we do has Earth applications,” says Kern, who cofounded Agate Biosciences with Green. “Principles learned from the space program can be applied to urban agriculture—sustainability, safety, quality.”

The key to agricultural production on other planets is conservation, he says. This includes water and energy conservation, along with fresh water production. Recycling will be a necessity, not a luxury—and everything will be recycled.

“There will be composting in space,” Kern says. “By necessity, we will have to recycle plant materials.”

Plants grown on the Moon and Mars would be grown hydroponically, and Kern predicts that one day, aquaponics operations will find a home on Mars.

In 1996, Kern and Green came up with a design concept for a Mars Greenhouse Experiment Module (GEM), which is the size of a breadbox and is intended for delivery to the Martian surface on a robotic platform to demonstrate that plants can grow on Mars. In addition to lessons and applications gleaned from GEM, which can be applied to Earth, Kern also sees this as a first step toward human habitation on Mars.

“It’s (GEM) an outgrowth of a science fair project I did in eighth grade,” Kern says. “It’s been a lifelong interest of mine.”

This interest led him to obtain a Ph.D. from the University of California in plant growth, and later to working at the Jet Propulsion Laboratory on issues of microbes on Mars.

“Now I’m working with Gene (Giacomelli) to see where we can go,” he says.

Green has her Ph.D. in astronomy from The University of Texas at Austin and specializes in solar system dirt. She has over 20 years of experience working with NASA and the Jet Propulsion Laboratory.

Now, through Agate Biosciences, Kern and Green provide scientific and engineering consulting for greenhouse hydroponics. They, along with Giacomelli and others, are optimistic that agriculture will take root on the Moon and Mars, and that food production on Earth will benefit from this new frontier.

Giacomelli believes that one of the most significant applications for extraterrestrial food production is water conservation. All food produced on the Moon and Mars will have to come from a closed system, with 100 percent of the water used being recycled.

“This could push the envelope in some way to utilize water more efficiently,” he says.

So how close are scientists to making agricultural production on places other than Earth a reality? Referring to the recent harvest of romaine lettuce on board the International Space Station, Giacomelli says the technology for extraterrestrial production already exists. But technology is still lacking in its ability to build habitats on the Moon and Mars, and the heavy lift rocketry that would be required for a project of this scope is simply not a reality yet.

Despite these current obstacles, Giacomelli hopes that agriculture can be established on the Moon in the next 25 years.

Kern, who feels that an ability to produce food on Mars is necessary for future human habitation on the planet, could become reality as early 2030. But agriculture will happen on the Moon before it does on Mars.

“The Moon is a stepping stone on the road to Mars,” he says.

Three closed loops—oxygen, fresh water and biomass—will be required to grow food in extraterrestrial environments, says Giacomelli. But the cost is currently getting in the way.

“It will be a slow process,” he says. “Our priorities are elsewhere at the moment.”

But with climate change, greater demands for food production and continued population growth, there will be renewed focus on food and water, he predicts.

“This points to life support on other planets,” he says. “And we will learn more about Earth.”

Giacomelli also sees a renewed interest in sustainable agriculture, which makes him happy.

“Our entire society has diminished in agriculture,” he says. “We have limits on education to produce food—it is changing, and it needs to change.”