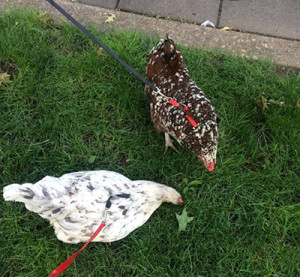 Pittsburgh City Council passed an ordinance in July to ease restrictions on maintaining chickens, ducks, goats, and apiaries in the city.

Drafted by a collection of agricultural nonprofits, the ordinance follows a 2011 regulation that required residents to undergo a hearing process lasting up to three months and pay up to $340 in cumulative fees. Under the new law, Pittsburghers can obtain a permit for $70 and be approved within a day.

It’s a much-needed change, according to Shelly Danko+Day, an open space specialist with the Department of City Planning. Between 2011 and 2013, she says, the city had received only 13 applications.

“It seemed like a really invasive process,” Danko+Day says. “It was expensive and kind of a pain.”

Adding salt to the proverbial wound, approximately half of the applicants were rejected, according to Jana Thompson, a member of the organization Pittsburgh Pro-Poultry People who helped revise the ordinance.

Thompson adds that the previous code was fraught with unwieldy wording that made the process and requirements abstruse, citing vague specifications like “poultry bird” and “300-pound non-domesticated animal.”

“The language was crazy,” she says. “I said at the time, ‘This is the sort of stuff Jon Stewart would read and make fun of.’”

Even when approved, chicken-owning residents still grappled with opposition from neighbors due to noise and odor, which, in some cases, would force them to lose their animals.

As a result of these conditions, most animal-husbandry in Pittsburgh isn’t legally sanctioned. Thompson estimates up to 500 chicken coops and up to 80 apiaries are maintained without permits. In fact, some organizations have taken a guerrilla-style approach to urban farming and building agricultural awareness; Pittsburgh Pro Poultry People, for example, has offered annual tours of coops throughout the city since 2011.

But it’s hoped that those numbers will shift. In addition to trimming the fat off of approval time and cost, the new law–which was created with input from Grow Pittsburgh, Burgh Bees, and the Pittsburgh Food Policy Council–reduces the minimum lot size for commercial and domestic crop-cultivation and animal-raising from three to two acres. It also allows residents to raise chickens, ducks, and bees on commercial (non-residential) properties.

To ease the process, Thompson says Pittsburgh Pro-Poultry People plans to hold classes on obtaining a permit. (The nonprofit currently offers a chicken-keeping course at the Carnegie Library.)

Danko+Day and Thompson hope the new ordinance–whose approval they attribute in part to the more ag-focused administration of Mayor Bill Peduto, who took office in 2013–will herald a friendlier, more transparent climate for Pittsburgh farmers and bolster local food-systems support throughout the city.

“These farmers are people who are thinking about things, and their empathy for the needs of their country, state, city, neighborhood, and friends makes them a more responsible and aware citizen than somebody who doesn’t worry about food or doesn’t do anything about it,” Thompson says. “Those people should be embraced and thanked for making movements to improve food.”