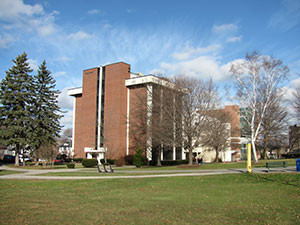 The University of Southern Maine in Portland is one of six campuses in the UMaine system whose food vendor contract ends next year. The UMaine system recently released a request for proposal to source more of its food locally. (Wikimedia Commons phot

On August 31, the University of Maine (UMaine) System released a formal request for proposals (RFP) designed to significantly increase sourcing of locally grown foods across its six campuses.

A contract between UMaine and corporate food vendor Aramark will conclude on June 30, 2016, ending a 10-year relationship. The move comes after a coalition of activist groups had lobbied the UMaine system to source more of its food locally.

The Maine Food for the UMaine System project is a coalition of 20 organizations, 170 farmers and more than 1,500 students, faculty and staff within the UMaine system. It’s spearheaded by Farm to Institution New England, Maine Farmland Trust, Real Food Challenge and Environment Maine.

The RFP answers their concerns. It reads:

“The realistic approach to increasing local food sourcing is to set measurable goals, reflect the supply side of the equation, and maintain affordability for students. The University is committed to achieving a goal of 20 percent locally sourced food by the year 2020 beginning with a minimum of 15 percent local food purchase in the first year with a 1 percent increase in each ensuing year. The University has determined that it will adopt the following definition of locally sourced foods for the term of this Agreement: The University of Maine System defines locally sourced food as any food produced or harvested by a producer or processor, including in Maine, within 175 miles of the University of Maine System’s seven primary campuses. This definition applies to the following food product categories: produce (fruits and vegetables), dairy, eggs, poultry, meat, fish/seafood, baked goods/grains and grocery. Processed or prepared foods with at least 50 percent of their ingredients by weight qualifying as locally sourced food will be counted.”

Six of the seven campuses in the UMaine system will be affected. These include campuses in Augusta, Farmington, Fort Kent, Machias, Presque Isle and the University of Southern Maine. UMaine’s system flagship campus in Orono has a different contract, and will not be directly impacted by the upcoming new agreement.

However, the Orono campus is already ahead of the other six campuses in the system when it comes to sourcing food locally. Eighteen percent of the food served up at Orono comes from about 25 Maine producers.

The UMaine system switching to local foods will mean a great deal to the state’s farmers, according to Riley Neugebauer, farm to college manager with Farm to Institution New England.

“We have a current food system in place that does not make it easy for local foods to be served at these institutions,” says Neugebauer. “We’re trying to change that.”

Neugebauer also feels that there will be a “domino effect” in the state because of the university system’s influence.

“Maine’s local foods economy has grown in leaps and bounds over the last decade,” said Maine Farmland Trust John Piotti through a news release. “The University of Maine System has a tremendous opportunity in its upcoming food contract to take advantage of, and further catalyze, Maine’s local foods movement.”

The UMaine system’s board of trustees has been very receptive to the idea of sourcing local foods at its campuses.

“We didn’t set a specific percentage, but it would be wonderful if it were 20 percent or more,” board chairman Sam Collins told the Portland Press Herald (prior to the RFP release).

Neugebauer says it’s important for Maine farms to scale up to meet a greater demand for local products, as well as more collaboration and partnerships throughout the state. She’s happy with the progress that has been made and is confident that local foods will gain a foothold in Maine’s university system.

“Every single person we’ve talked to has been supportive,” she says. “There’s been overwhelming positive response.”

“It could potentially be huge,” says Mike Gold of Maine Farmland Trust.

Gold is excited but acknowledges several obstacles. Chief among these are resources and infrastructure. While Maine has quite a bit of local farmland, accessibility can be an issue. Additionally, lots of institutions like to deal with only one vendor. But he feels that if the UMaine system can increase its use of local foods, this could be a game-changer for the state.

“With a big customer like this ready and waiting, it could potentially be huge,” he says. “There’s no doubt that there’s obstacles, but we’re making headway.”

Gold said the many small family farms in Maine would benefit.

“I’m hopeful,” he says. “Here in Maine people like to support their neighbors.”The new contract, once finalized, is scheduled to take effect on July 1, 2016.