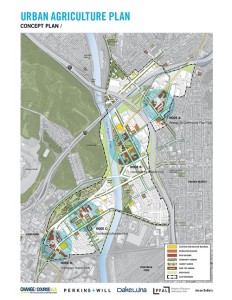 Organizers of the LA River food and ag zone envision a myriad of attractions, including farmers’ markets, as well as local transportation facilities. (image courtesy of Leigh Christy/Perkins+Will)

The Los Angeles River flows from the Simi Hills, northwest of Los Angeles, through the San Fernando Valley and into the Pacific Ocean at Long Beach. A large portion of the river is concrete.

But now, urban planners and other stakeholders envision a portion of the LA River as being home to a robust agricultural zone in the heart of Los Angeles.

Funded by a California Proposition 84 (Safe Drinking Water, Water Quality and Supply, Flood Control, River and Coastal Protection Bond of 2006) grant, the Los Angeles River Revitalization Corporation and architecture and urban planning firm Perkins+Will have explored the feasibility of creating an agricultural hub on the banks of the Los Angeles River.

After extensive research and community input, the conclusion was that such an agriculture hub is a viable option. Specifically, it was decided that a 660-acre area along the river in the neighborhoods of Lincoln Heights, Cypress Park and Chinatown is an ideal place to start such an urban agriculture project.

But rather than view the entire 660 acres as just one agriculture zone, the study has shown the benefits of utilizing several “nodes,” or areas, each one featuring one aspect of urban agriculture.

For example, Node A, located near Avenue 26, could be a great location for a commissary and food hub. Node B, near the Ed P. Reyes River Greenway in Lincoln Heights, could serve as a food incubator with restaurants, breweries and aquaponics facilities. Node C, bordered by the Los Angeles River and Los Angeles State Historic Park, would be suitable for commercial agriculture production as well as community gardens. And Node D, near Chinatown, could provide space for public events where education about and promotion of urban agriculture might take place.

Leigh Christy, a senior project architect with Perkins+Will who is helping with planning and design of the LA River food and agriculture zone, feels that many factors are in place to make this kind of urban agriculture area in the city a reality.

In addition to the support of the Los Angeles City Council, Christy cites “many small victories along the way.” Even though more partnerships are needed, and community outreach continues to happen, she says that an informal “food and ag zone” is already in place along the LA River.

“There are farmers’ markets on the ground, hydroponics and aquaponics,” she says. “There are lots of grass roots happening, community gardens, a critical mass of food processing plants, and residents from different countries growing a variety of things.”

Work on a pilot project was scheduled to begin in 2015, but the urban agriculture plan for the LA River started long before, in July 2011, when the Proposition 84 grant application was formally submitted.

Current recommendations include: utilizing already existing food-related operations and new public policies; coming up with a strong definition of what constitutes urban agriculture; improving bike and pedestrian transportation networks; creating community gardens and educational programs; and utilizing native, edible plants that are native to Southern California and that don’t require much water.

Christy believes that many facets fall under the umbrella of urban agriculture, including new irrigation methods, aquaponics, hydroponics, native plants and greenhouses.

“It’s all about defining what agriculture means in a city,” she says.

According to Christy, the project has drawn interest from people not only from Los Angeles but from far away as Seattle. And some of the most vocal proponents have been high school students.

“High school students were amazing in their desire to push things forward,” Christy says. “This led to the idea of a school garden.”

There are five or six elementary schools near the study area, and Christy sees this is a wonderful opportunity to educate.

“How do we get into schools to help bring children up to be good stewards?” she asks.

In the meantime, Christy and others involved in this urban agriculture project in Los Angeles keep pursuing small victories, forming partnerships, leading walking tours, conducting information sessions and educating people about the importance of urban agriculture in the city and its role in helping revitalize not only the LA River, but entire neighborhoods.