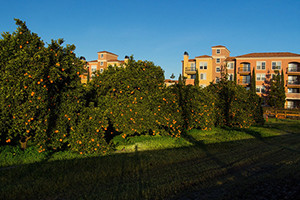 In 2014, the state of California passed AB 551, the Urban Agriculture Incentive Zones Act, which allowed towns and cities to offer tax breaks to property owners that turn vacant land into urban farm space. Best known as the center of America’s tech industry, Santa Clara County, CA has pushed the urban ag door wide open for the towns and cities in their jurisdiction by adopting the Incentive Zones Act to boost urban agriculture.

“So much of agriculture is being depleted and developed. The intention is for ag producers to stay in ag production with a property tax break,” says Joseph Deviney, Santa Clara County Agricultural Commissioner as he explains the decision to adopt AB 551 for the county.

“It’s very clear in the legislation that it’s for blighted areas, abandoned areas in urban settings that are not being used but are being a nuisance as a blighted property.” Feeling many landowners “sit” on property waiting for the housing market to recover, Deviney thinks the waste land of the inner city has the potential to become community green space and have a real effect on the local economy. “The beauty of that community garden: how much does that raise the value of the neighborhood for housing properties instead of having the blighted garbage pit,” asks Deviney.

San Francisco was the first county to green light the state legislation and Santa Clara County officials watched the process carefully before adopting their resolution. Santa Clara County passed their zoning incentive in June of 2015. The designated “zone” is based on population. All but two towns in the county made the cut.

Proving healthier food choices to the inner city is one of the long-term goals behind the legislation. “For urban people who don’t have access or might not have the financial ability to buy a lot of fruits and vegetables, without access to a farmers’ market or to a larger grocery store,” says Deviney. The county has already identified 1074 parcels of eligible land in the county’s downtown areas.

According to the Incentive Zone Act, Santa Cara County property owners with blighted and vacant urban space would allow farming on their property for five years. Urban lots must measure a minimum of 4,356 square feet. They can be no bigger than three acres. The lots must be for agricultural use only and be in an incentive zone. Residential buildings are not allowed on the property although food stands, tool sheds and greenhouses are permitted.

Still in the initial planning stage, the Santa Clara County initiative should be on its feet by the end of summer with amendments and additions expected as the process plays out.

“I think the hard part though is I’m not sure how many landowners will be interested in it. They may be worried about liability; they may have some soil issues. But it’s only early,” says Deviney. “There are a lot of organizations really interested in urban agriculture, the local food movement. We need more fresh fruits and vegetables here locally to provide to the urban people that don’t have access.”

With the Act still in its infancy, the details and red tape have yet to be completed. Individual cities must apply to the County to designate zones and offer tax breaks. The Board of Supervisors wants to produce a model or process that is then available to every town in the county.  “A model ordinance we can all live with. My department will go and do the site inspection to make sure they meet the criteria. I foresee an application process,” says Deviney.

Thirteen cities and towns in Santa Clara County are eligible for the Urban Agriculture Incentive Zone Act. San Jose, with a motivated local food movement already in place, is expected to be the first town to apply. A detailed draft of the Santa Clara County Urban Agriculture Incentive Zone Act with all restrictions and incentives outlined will be made available for public comment in August of this year.