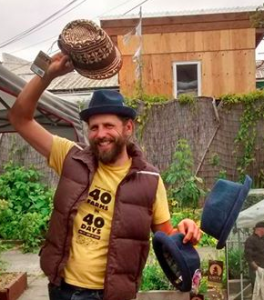 Grefrath, who has a background in soil remediation and farming, wanted to increase access to fresh local food by creating urban farm space in  Berkley, CA.  And in 2012 he had his eye on a piece of research land owned by UC Berkley that was slated for development.

“A group of us organized a covert land occupation with a focus on farming on seven arable acres on the north side of Berkley,” says Grefrath. The event would later become known as “Occupy the Farm,” inspiring a documentary of the same name.

“We marched onto the land on Earth Day 2012 and cut the locks, went in and farmed. We farmed and occupied for three weeks. There was escalating police involvement. It ended in a police raid with about 70 riot cops, and I think seven arrests something like that that day,” says Grefrath. “We went back for illegal protests, protest harvest I guess you’d call them. We had 10 or 12 or so harvests in the summer of 2012 and then that was about a ton and a half of produce that we gathered and  gave away.”

Today, that land is known as the Gill Tract Farm and is legally cultivated by the local community with the university’s blessing.

“In an era when so much of the environmental movement is like symbolic wins or wins of consciousness or perspective shifting or awareness raising,” says Grefrath,  “to actually have a physical win, seven acres of land that’s not going to be developed for ten years, that is actually pretty amazing.”

“We took what we’ve been able to achieve with Occupy the Farm and made it more relevant for folks living in an urban area with damaged soils,” says Grefrath.

“I don’t know if we’ve reached 40 yet,  but we definitely are around that number, exploring community intentions for the land,” says Grefrath.

A core focus for Oakland Spring Rising is healing the soil in urban Oakland through soil testing and soil remediation methods. Unlike many urban farm groups focused on raised bed planting, Oakland Spring Rising is focused on fixing the existing soil for the long term. By adding compost, certain plants and mushrooms to the urban soil, the volunteers replenish the nutrient base.

“There are definitely issues with soil quality. Anywhere there is an industrial area, you have toxicity in soils. The solutions themselves are not financially attractive. You are talking about years of building soil. It’s not something where you are guaranteed success,” says Grefrath. “It’s more like you are going to do your best to lower the amount of toxicity. In the long-term, having community focused soil testing is the thing I think is going to be the big difference.”

The projects use city water to maintain crops, and the statewide drought is playing a role in Grefrath’s advocacy efforts.

“The drought is something that looms over all of California right now. Water tables are dropping all over the place. It’s the kind of thing that can’t go on indefinitely,” he says Grefrath. “There’s nothing really comprehensive being planned for the water situation in California, other than non-binding, patchy kind of measures. Room is opening up for more experimentation.”

Grefrath advocates a return to controlled burns that Native Americans used to help replenish the land for thousands of years. He feels a comprehensive plan of land restoration, not unlike the work of the Civilian Conservation Corps, would help get California back on track.  But sees that solution as harder to sell than current sexy solutions of shiny new apps and social entrepreneurialism.

“Convincing folks that what we need is volunteer labor in rural areas with a lot of hard work is something that’s not politically exciting,” says Grefrath.

Advocacy work will continue at Gill Tract and through Oakland Spring Rising, but Grefrath is on the move once again. Now residing in Mendocino County, he intends to open a school next year specializing in restoration agriculture, natural building and farm-scale permaculture.

“We’re going to have to start working in as honest a way as we can, bit by bit,” says Grefrath. “The more we can get toward that as a way of operating; I think we’ll be closer to sanity for the entire species.”