From Blight to Opportunity: Detroit Woman Puts Kids to Work in Community Garden 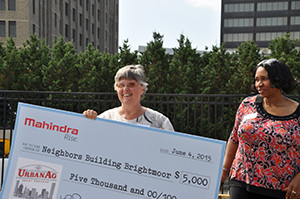 Riet Schumack not only has a heart for gardening and kids, but also for the city she loves and calls home: Detroit. And since 2006, her heart has led her to help inner city kids become gardeners, and in the process, transform blight to beauty.

In 2006, she co-founded the Brightmoor Youth Garden in Detroit’s Brightmoor neighborhood as a way to counteract prostitution and drug dealing in the area, as well as to provide a safe space for children.

Children in the neighborhood quickly took to the garden, where they learned new skills and honed their work ethic and got paid for what they grew. By 2009, the market garden took up six city lots.

That’s when Schumack, not content to live in an affluent area while working amongst young people in the inner city, moved to Brightmoor.

“I had already been a volunteer in Brightmoor, but felt that to be most effective, I should live there,” she says. “Kids and greenspace are my passion.”

Plants weren’t the only things growing from the garden, which quickly improved the appearance of the Brightmoor neighborhood. Consequently, hope and optimism bloomed. More neighbors became involved in cleanup efforts, and gardening in the neighborhood proliferated.

In 2009, Neighbors Building Brightmoor was born out of these previous efforts. It gained nonprofit status in 2011.

While many people have worked to make Neighbors Building Brightmoor a success, Schumack’s vision for what Brightmoor could become helped lead the way. When others only saw poverty, crime and blight, Schumack saw opportunity.

“Blighted places are positive because of opportunity,” she says.

Very early on, Schumack took an inventory of positive aspects and opportunities in the neighborhood, and gardening was an obvious solution.

“Gardening is a very active way to add greenspace and increase beauty,” she says. “Gardening is a cheap way out of poverty and blight. We want to use what is here—that is part of what I do. It’s easy to write grants to get lots of money, but to me, this is not sustainable.”

For Schumack, creating beauty, health and wholeness with whatever is at hand represents true sustainability. But little did she know just how sustainable, and successful, her efforts would become.

In 2006 when this journey started, she thought she would work with a couple of kids and experience modest success. But just a little bit of money spent had a tremendous impact.

“People with no hope and all negative experiences suddenly were able to see from one day to another,” Schumack says. “It also totally changed the looks of the place.”

Newly created beauty and a new abundance of healthy, fresh, locally-grown food increased the sense of community and resulting hospitality in Brightmoor.

“If you’re disadvantaged financially, it’s hard to be hospitable, especially if you don’t feel you have food worthy of sharing with others,” she says. “But creating beautiful space is a form of hospitality and generosity. It makes people feel really good.”

For too long, according to Schumack, residents of blighted neighborhoods in Detroit were vested in waiting for others do provide food, address blight, grow gardens, etc. But now that Brightmoor residents are doing this themselves, a new sense of ownership and recreated community now exists.

Money speaks too, of course, and even though kids who work at the market garden gain life skills and form new friendships, they initially come because of the money, gleaned from sharing market garden profits.

And for the first time in their lives, many of these kids are eating healthily. There’s a dearth of healthy food options in Brightmoor, says Schumack, and many local kids have grown up eating junk food.

“Our program helps them to learn the benefits of eating healthily,” Schumack says.

Another health benefit is that gardens have drawn Brightmoor kids outside.

“Outside has not been a good experience for them—it’s been dangerous and ugly,” says Schumack. “The gardens draw them outside. They get their hands dirty—it’s very fun to watch.”

Schumack plans to continue working with kids and adult volunteers in revitalizing Brightmoor and its residents, one garden at a time.

“My vision is to make the neighborhood sustainable, safe and healthy, however that may look,” she says.