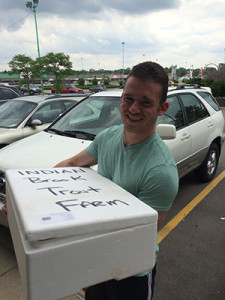 The young company (it officially started in June) aims to not only take the reins of a burgeoning aquaculture industry in southeast Michigan, but to use aquaculture to contribute to the revitalization of Detroit.

“Detroit is the perfect city for this,” says Detroit Seafood Partners president Michael Noeske. “There are thousands of vacant warehouses and buildings that need to be used. The city is hungry for something like this, and we can build its economic recovery around it. Detroit, with its large amount of vacant space, can become an urban farming and aquaculture hub.”

Noeske, an alumnus of the University of Michigan, became interested in aquaculture when his roommate, Daniel Bloch, began fish farming on a small scale from funds bolstered by TechArb, a startup accelerator for students at the University. Noeske quickly became excited and got involved, and now he and Bloch are business partners.

The University of Michigan and the Ann Arbor area have both become unofficial incubators for sustainable agriculture endeavors. Noeske credits this to the university’s proximity to Detroit and its culture of innovation and progressivism.

“Both the city and university are great environments for urban agriculture,” he says.

Success has arrived quickly for the startup—already Detroit Seafood Partners supplies fish to five restaurants and a couple of grocery stores, and Noeske and Bloch envision more local product lines, including spiced fish. They would  like to expand their reach into a greater number of restaurants and stores, as well as increase the variety of fish they supply.

Detroit Seafood Partners worked with Dorsey Culinary Academy and Indian Brook Trout Farm in Jackson, Michigan to feed local trout to over 1,500 people at a fundraiser. Additional funding came from the duo’s personal finances, and Detroit Seafood Partners has applied for a grant from Motor City Match, an organization that helps match businesses with buildings in the city.

The founders say infrastructure is  a more pressing issue than funding.

“Lack of a seafood distribution service is our primary obstacle,” says Noeske. “The problem is distribution—networks aren’t set up properly. There are 30 small-scale fish farmers in the state, but not enough processing facilities. We need a distribution network to sell our fish.”

Detroit Seafood Partners has decided to tackle this problem head-on by operating its own seafood processing facility that may be used by other entities, and by pledging to reinvest a portion of its earnings to establish more fish farms based in Detroit. Their ultimate goal is for Michigan consumers to eat solely Michigan-raised seafood.

Increasing fish farming in Detroit also comes with a social justice mission. Detroit Seafood Partners has joined with Safe Place Transition Center for veterans and food waste reduction/food aid organization Forgotten Harvest to boost fish farming in the city. The company will employee veterans to help raise fresh seafood, and in the process fight hunger in Detroit and the surrounding area.

Noeske also sees a growing aquaculture industry providing jobs and economic stability to Detroit residents, especially those in some of its poorest areas. Additionally, he sees aquaculture as a great way to help the environment and regrow the fish population living in the world’s oceans and rivers. Without aquaculture, continued overfishing could decimate the world’s population of wild fish.

Even though aquaculture supplies half of the fish that Americans eat, the United States imports 85 percent of its seafood, according to the Michigan Aquaculture Association. However, Noeske and other believe that Michigan, with its abundant supply of water and close geographical proximity to numerous large population centers in both the United States and Canada, is uniquely well-positioned to become a world leader in aquaculture-based fish production.