Strolling of the Heifers’ 2015 Locavore Index: Building a Local Food System on a Tradition of Self-Reliance in Montana 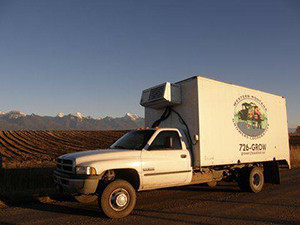 This piece is part of a series exploring the top 10 states in the Strolling of the Heifers 2015 Locavore Index.

Agriculture is the largest industry in Montana, a state with more resident cattle than people. Five percent of the $3 billion that Montanans spend on food every year goes to local (in-state) food.

Sixty-nine farmers’ markets, 36 CSAs and two food hubs serve a population of just over 1 million residents. One of these food hubs, the Western Montana Growers Cooperative (WMGC), has been at the center Montana’s local food movement since they opened in 2002.

What started as a group of just four growers distributing to Lake County has become an alliance of more than 40 producers. The group includes vegetable growers, egg producers and a full-scale creamery. The cooperative make $2 million a year in revenue (producers also sell through other outlets, not just through the cooperative).

According to Steffen Brown, WMGC Assistant Manager and Sales Manager, the hardest part is “just keeping up” with demand.

“Trying to understand how we’re growing and how to respond to that, and keeping our commitment to our growers,” is a challenge, according to Brown.

Jennifer Hill-Hart is the executive director of the Alternative Energy Resources Organization (AERO) and a steering committee member for Grow Montana Food Policy Coalition. According to Hill-Hart, a long history of isolation taught Montanans about self-sufficiency. Even today, small rural towns may find that imported vegetables are expensive and less than fresh. But in this agricultural state, a farm is never too far away. It doesn’t hurt that “there’s still a strong family farmer and ranch base” in Montana, says Hill-Hart, giving it unique leg up in the movement toward local food.

The state government has also been supportive of the local food movement. It offers a variety of grants and loans intended to “help boost locally grown products, and help local foods expand into more schools and institutions,” according to Montana Governor Steve Bullock.

The grants target beginning farmers, specialty crop producers (the USDA designation that most small producers fall under) and initiatives like the Growth Through Agriculture program, which support the diversification of Montana’s food system.

Though the phrase “local food” sometimes has bourgeois overtones, in Montana local food is practical. Montanans across the political spectrum feel good about buying local.

“There’s a lot of pride here,” says Brown. In his work for the WMGC he has seen that “it’s not just the hippies going to farmers’ markets so to speak, but people across the board with different educations, different economic status.” The difficulty of getting imported food to rural areas further evens the playing field between local and imported food.

The media has played a substantial role in raising awareness of the importance of local food, according to Brown. Montanans are reading and hearing about local food, “whether it’s the Washington Post or the Missoula Times.”

Appreciation for local products in Montana runs deeper than the recent hype around eating locally. A small state population and tight-knit communities narrow the gap between consumers and producers.

With Roots in Soilless Growing and Desire to Promote Health, Couple Sets Sights on Aquaponics Operation