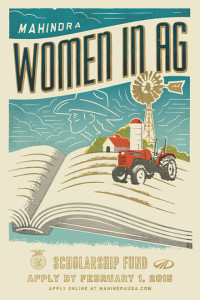 Mahindra USA, a Houston, Tx.-based farming equipment manufacturer, shifted its focus towards sustainable agriculture, in 2010. And now the firm is looking to boost small urban farms with a recent investment of $100,000 in Detroit’s urban farmers.

Through its Detroit-based North American Technical Center, Mahindra awarded money and equipment grants to five Detroit nonprofits. The recipients include two community gardening programs, the Neighbors Building Brightmoor’s Farmway group and the Detroit Black Community Food Security Network’s D-Town Farm. The city of Detroit received a Mahindra utility vehicle. The tractor company has made similar awards to other metropolitan areas and their urban farmers in the past.

“As part of the urban ag initiative program it’s a natural fit,” says Martin Cisneros, Marketing Communications Manager at Mahindra USA remarking on the Detroit investment.  “I think it’s a movement we’re generally seeing across the industry; a more sustainable agriculture. Seems like the ecotype farming initiatives, the co-ops, is what you see a lot more of.”

Mahindra recognizes that urban farming and community gardening projects strengthen community and improve healthy food access in American’s inner cities. “More and more people are starting to be the organic solution; wanting to get back to the natural production to be sure that the food they are eating is healthy and create a product they can feel good about,” says Cisneros.

Mahindra developed the first National Women in Agriculture scholarship program. Partnering with the Future Farmers of America (FFA), Mahindra USA offers educational funding to women pursuing a career in sustainable agriculture. “Because of the role that young adults and, in particular, young women play in advancing agriculture, it is important to provide this critical foundation to support these students and help them give back to their communities for a sustainable future,” says Cleo Franklin, Vice President of Marketing & Strategic Planning.

Mahindra USA’s latest marketing campaign “Rise” puts female farmers in the spotlight. “The Women In Ag spots capture the heart of the women who contribute so much to the agricultural community and passionately work the land they love. They have earned the spotlight with their unbridled energy and unwavering spirit,” says Franklin. This year Mahindra added a second scholarship program open to all sustainable agriculture students in the metropolitan areas of Chicago, Detroit, Houston and Indianapolis.

A relationship with the growing urban farm movement will help Mahindra USA build brand loyalty and customers in their target group. “Our entire product line is geared towards that. We’re going to call them the rural lifestylers, the farm owners, the sundowners; you know, the people that are either going to work in metropolitan areas or on property outside in rural counties,” says Cisneros.

Mahindra’s Urban Agriculture grant program and its educational scholarships are Mahindra’s way of living up to its new business philosophy that came about after the downturn of traditional economics in 2008. “It’s always been a customer focused organization. The philosophy change arose back in 2010 when we wanted to get all the Mahindra groups worldwide under a common philosophy,” says Cisneros. “Mahindra’s life philosophy is accepting no limits, alternative thinking and driving positive change.”

Mahindra was first established in 1945 in India as a steel trading company. Today they produce America’s third highest ranking tractors and farm utility vehicles and the top selling tractors in the world. Investing in American sustainable agriculture will help the global company expand its reach and promote its overarching corporate mission. “It’s something that we strongly believe in and we want to help communities continue to grow, communities to rise and to drive positive change for people within those communities,” says Cisneros.