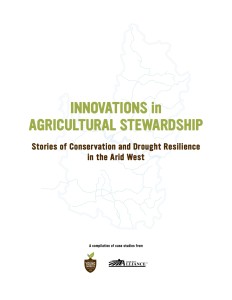 The National Young Farmers Coalition (NYFC) partnered with the Family Farms Alliance to create Innovations in Agricultural Stewardship: Stories of Conservation and Drought Resilience in the Arid West, a report featuring five case studies, with analysis of the balance of water usage around the year at three operations.

The farmers and ranchers featured range from multi-generation family farms to first generation growers figuring out the ropes as they go along. The farms are located along the headwaters of the Colorado River, in the Upper Basin and in one case, in California.

With no end to the drought in site, Innovations in Agricultural Stewardship focuses on “pointing a way forward,” according to Kate Greenburg, Western Organizer at the NYFC and co-author of the report.

The report highlights improvements that farmers and ranchers have made to decrease water usage, namely by careful choices of irrigation technology and soil management techniques like cover-cropping, rotational grazing, no-till farming and mulching. These choices not only increase farms’ resilience to drought conditions, but also balance the necessity of maintaining yield and the importance of wildlife, ecosystem services and community health.

One ranch uses the “less efficient” flood irrigation to water some parts of their pasture because nearby waterfowl habitat depends on the run-off. The report notes that, “In this specific case, increased irrigation efficiency could hinder other conservation values.”

Other producers sometimes use inefficient irrigation methods due to the prohibitive costs of switching to a new system.

“Not every practice is suitable for every farm but every farm can think about their operations in the whole,” says Greenburg.

Those practices were up for consideration in the Senate Energy and Natural Resources Committee’s June 2 hearing on the western drought, where staffers requested that Innovations in Agricultural Stewardship be circulated to the committee members, a development that Greenburg describes as “phenomenal… this is a voice that is needed in water policy discussions.”

Greenburg outlines a historical pattern in which rapidly growing cities buy water rights from agricultural land, leading the land to go out of production. “Southeast Colorado is a really pertinent example where that happened,” she says. “Now the land is completely unproductive and only grows tumbleweed.” Greenburg voices concern that the continuation of this trend will not only lead to less western farmland being in production, but will also limit young farmers’ access to arable land as water for agriculture becomes less available. She notes that less farmland in the west would also mean less local food.

“We certainly hope that the case studies will help educate policymakers on the diversity of western agriculture” and that they craft policy that emphasizes sustainable agriculture, soil health and water conservation, and incentivizes farmers and ranchers who follow those practices.

“We can sit in conference rooms as much as we want, shifting numbers around on a balance sheet, trying to figure out how to get more water but farmers and ranchers are actually on the ground, really living it and building creative solutions to drought impact and water scarcity,” says Greenburg. “So this report calls on all of us, especially policymakers, to be farmers’ allies in developing those solutions.”