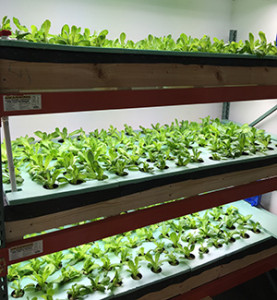 That’s all by design. Witt and Matt Latham, the farm’s other co-owner, planned Vertical Fresh Farms’ small but sustainable layout.

From 2011 until spring of 2014, Latham and Witt intensely researched aquaponics to figure out how they could afford to build their own farm.

“Last year, we finally decided that we would start small and started out with a prototype,” Witt says. The prototype takes up an area that’s about 250 square feet.

“Our initial plan was to start with a facility that was about 3,000 square feet, but after getting into the costs associated with a building that size, we figured out that a prototype was probably a better place to start before we put a lot of money in the project,” Witt says.

Because the business partners decided to build a small prototype, they were able to fund the project themselves.

“We spent, in labor time, about $1,200 retrofitting the garage and buying the materials to set up the vertical farm,” Witt says. “We were able to do that ourselves.”

Latham and Witt also chose to start small because they didn’t have a lot of experience. “Both of us only have business backgrounds,” Witt says. “We are handy people but we still had never done anything like this.”

Because of the partners’ lack of experience, their biggest challenge during the initial building phase was the plumbing. “That was one of our bigger problems because we weren’t master plumbers,” Witt says.

Latham and Witt say their plan to take it slow and steady paid off because they didn’t run into many problems they couldn’t handle themselves. And since the building process didn’t have many snags, the partners were able to get the farm up and running quickly.

“The idea was to get our prototype running to get some street credit built,” Witt says. “Now, we are at the point where we are seeking out ways to build a larger farm. We are working with a bank to explore small business loans, and we’ve worked with a developer who likes the idea.”

Currently, the farm is producing heads of romaine lettuce and operates with Koi fish. However, Witt says they may change out the Koi for an edible type of fish down the road. “We were on the fence whether or not to grow fish for pets or to grow fish for food, but we really wanted to capitalize off the fish,” Witt says. “Right before we bought the fish, I had a friend send me an article about how bad fish farming is. I worried that people would think fish farming is bad.”

This was a valid worry, because, as Witt points out, it’s hard to dispute a person’s perception about fish farming if you don’t have a solid argument. And at the time, Witt hadn’t formed his argument. So, to be safe, the partners decided to use Koi fish in the meantime because they are decorative.

“After digging further and further into the issue, though, I’ve decided I want to farm fish as much as I want to farm plants,” Witt says. “Through the aquaponic system, we can reduce the amount of toxins in the water, which is ultimately the reason that people don’t like fish farming.”

Latham and Witt are eager to expand so they can achieve their ultimate business goal: To provide fresh produce to as many people as possible at a reasonable cost. Witt says he definitely wants to expand to the point where they can sell at farmers’ markets, and sell to local restaurants. “We’re in Buffalo because I’m from Buffalo and I have a lot of connections here, but the idea is to build three or four of these types of farms in Buffalo, and to expand to other cities,” Witt says. “We see this as not just an opportunity for cities, but for everywhere. We have huge aspirations. We want to provide produce for everyone.”

So far, Vertical Fresh Farms is on track to fulfill its founders’ dream. “We’ve had some people reach out from restaurants — both chefs and owners — who are interested in developing their own farms,” Witt says. “Even if they are just growing their romaine lettuce, microgreens, and things like that, they really want to provide that [farm-to-table] experience to people.”

When asked what advice Witt would give budding farmers, he replied that planning is everything, and mapping out what you want to do before you do it is imperative. Because, as Witt explains, no one would ever doubt that starting a farm is a bad idea — the real question is if a person can actually execute the plan. “The only way to do that is to start out small and not be overwhelmed,” he says.