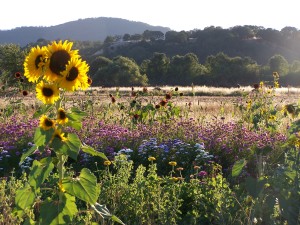 Bailey’s answer to helping farmers get over this hump came in the form of the MendoLake Food Hub. He serves as coordinator of the project for North Coast Opportunities, based in Ukiah, California. Twelve farmers are already on board, and Bailey expects the new food hub to be in operation by late May or early June.

“We want to help farmers get into more business channels,” he says.

Knowing that the traditional food hub model consists of a main facility where farmers bring their produce, Bailey and his colleagues wrote a grant for that type of system. This resulted in an almost three-year specialty food and crop grant from the California Department of Food and Agriculture.

But it soon became clear that this kind of system was not going to work in such a large geographical space. Mendocino and Lake counties, put together, are the size of Rhode Island and Connecticut combined.

“We realized that with farmers in both counties so spread out, maybe one location would not be practical,” Bailey says.

So Bailey and his team revised the grant. The new model utilizes small containers spread throughout both counties where farmers can drop off their products, as well as a service to pick up the produce and deliver it to buyers.

“Now it’s widespread, with no main food hub at all,” says Bailey. “We just had to work with what would work; there’s no overhead. If we had a warehouse and trucks, it would cost a million dollars of overhead to make it run.”

This kind of system is made possible with the use of four 20-foot shipping containers, with cooling systems that keep temperatures anywhere from the high 30s to low 50s, depending on the need. The containers are located on participating farmers’ farms, which helps MendoLake meet zoning regulations for agricultural land. The food hub uses two existing produce delivery services, one for each county served.

Another twist is that the food hub targets wholesale orders, and does not accept any individual retail purchases. An online ordering system streamlines the process. Rules and regulations, although different for this model of food hub, still apply. The produce must be contained in fully-packed boxes, and sealed by farmers. This means no aggregation.

Everything sold through MendoLake is marked up a flat 15 percent to cover expenses. About 25 buyers (not counting buying clubs) have signed up, and the food hub is also marketing to grocery stores. Bailey says another option could be serving local schools, but price could be a question mark.

Since the food hub is funded by a specialty crop grant, currently it can only sell specialty crops. MendoLake is looking for additional funding resources for other crops and products, such as beef, fish and a full range of fruits and vegetables.

After the grant expires, Bailey says the Food Hub will go in one of two directions. It will either become a farmer-member co-op or will augment an existing private enterprise.

But for now, Bailey is excited about the food hub’s future.

“It’s been great to get so much support,” he says. “Local businesses have been very supportive.”