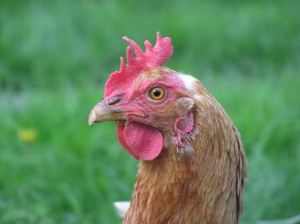 The City of Pittsburgh will look at a proposed ordinance that would streamline the permitting process of raising chickens, goats and ducks in the city limits. (photo courtesy Wikimedia Commons)

Even though raising chickens is legal in Pittsburgh, Pennsylvania, city residents who want to own these birds have had to deal with cumbersome regulations. But thanks to a new proposed ordinance, this may change.

The previous law, passed in 2011, required Pittsburghers to fork over $340 and undergo a hearing process lasting for several months. Hence, only 13 people in the city have successfully applied for a chicken-raising permit.

Yet many chickens call Pittsburgh home but fly under the radar, according to Shelly Danko+Day, an open space specialist with the City of Pittsburgh.

Indeed, some of these “under the radar” chicken growers have even formed a group called Pittsburgh Pro-Poultry People, an organization with a self-described mission of “seeking to promote the joy of chickens within the city without permit requirements.” The alliance runs “Chicks in the Hood,” a tour of Pittsburgh urban chicken co-ops.

Additionally, corporate attorney Jody Noble-Choder (an avid raiser of urban chickens) and her husband Stephen run Choderwood, a bed-and-breakfast in the city that sits on the banks of the Allegheny River and lists fresh eggs laid daily by resident hens as one of its many amenities.

The proposed ordinance aims not only to make chickens legal denizens of the city, but also ducks, goats and bees (in beehives).

Residents living on a property of 2,000 square feet or more may pay $74 to own five chickens or ducks or two dehorned miniature goats. The permit process would take only one day, and residents may also have up to two beehives. The more land a resident has, the more livestock and/or beehives he or she may own. Roosters, due to their noise, would still be illegal.

At a public meeting regarding this issue in February 2015, local agriculture advocacy organizations such as Grow Pittsburgh and the Pittsburgh Food Policy Council provided input.

“There were over 150 people there, and I did not hear much negative,” says Danko+Day, who has also heard nothing but positive remarks about the ordinance from the Pittsburgh City Planning Commission. “I think that says a lot about where we are on this as a city, as a community.”

The next hurdle to jump is approval by the Pittsburgh City Council—this process is not scheduled yet.

“We’ve worked really hard on this,” she says. “It’s a quality of life issue, it attracts people, and it bolsters Pittsburgh’s reputation as an agriculture-friendly town.”

However, Danko+Day only sees this as one step toward the spread of other urban agriculture projects throughout Pittsburgh. She notes that the city utilizes no composting, no greenhouses, and no bio-digesters. Additionally, the city owns 7,286 parcels of vacant land. She would like to see some of these lots identified for use by urban agriculture.

“This is a gateway,” says Danko+Day, who believes that more urban agriculture in Pittsburgh will have profoundly positive and far-reaching results for the city, including job creation, closing gaps in food access, creating community space, and education training for students and the workforce. “There are so many positive aspects of urban agriculture.”

While she believes urban agriculture will positively affect communities in the city, she knows there are city residents who do share her enthusiasm for urban chickens and other animals within the confines of Pittsburgh. She hopes to change their minds.

“It’s just something new—it freaks people out,” she says. “It should not negatively affect communities.

She compares goats, ducks and chickens to her “neighbor’s barking yappy little dog” that produces waste quite a bit larger than the types of livestock outlined in the ordinance.

“I hope urban agriculture continues to grow here in Pittsburgh, maybe even more than in other cities,” she says.