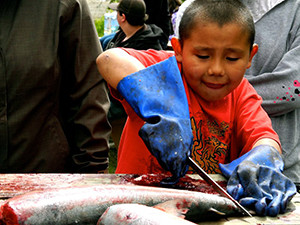 Courtesy of the AMCC

Founded in 1994, the AMCC works hard to ensure the economics of Alaska’s most bountiful natural resources, its marine life and coastal communities.

“We’re trying to localize the food system in Alaska in that way by making sure that someone who is a small boat fisherman in Kodiak is catching cod and rockfish with hooks and lines, that someone here in Anchorage can eat it. Those are the kind of supply chains and innovations that we’re trying to bring about physically,” says Kelly Harrell, Executive Director of AMCC and member of the Alaska Food Policy Council.

The AMCC team works with local fishermen to increase access to local food sources in the face of large commercial shipping enterprises and threats to Alaska’s ecosystems. “That’s the role we’re trying to play; looking at our small boat fisherman as we do our small family farmers,” says Harrell. “They are so critical to the economic, social and cultural fabric of our coastal community.”

“Our big goal is a safe, secure and prosperous food system for the state. We have a lot of challenges because we’re pretty vulnerable to things affecting transportation. Alaska is food insecure in a lot of really important ways,” says Harrell. “Salmon especially is such an important source of food for so many Alaskans especially in rural Alaska.”

AMCC projects include a fish based CSA or more correctly a CSF, Community Supported Fishery. This allows Alaskans to purchase weekly boxes of locally caught fish that support local fishermen. The council’s Working Waterfronts program supports the efforts of local fisheries and coastal communities in the face of strict regulation and the needs of larger commercial fishing operations. Connecting local fishermen with local restaurants, encouraging community stewardship of coastal areas and educating the next generation of fishermen is a large part of the AMCC’s community-based work.

One of the areas in which Harrell would like to see dramatic change is the export of American seafood to other countries and the import of foreign seafood to America. “90 percent of the seafood consumed in the U.S. is imported. Two-thirds of Alaska’s seafood is exported,” says Harrell.

“There’s a big opportunity there not just in Alaska but for other states that harvest seafood. There’s a huge effort that needs to be made to switch our seafood consumption to supporting our local fishermen,” says Harrell. “That’s something we’re trying to change. People that say they care about local food should not be eating that imported farm shrimp.”

Despite infrastructure and geography challenges, Harrell feels Alaska is moving in the right direction. “I would say it’s thriving. There are bright spots everywhere. People are motivated from all different sectors, all different types of community. It’s a really large state but everywhere, in pretty much every part of the state, something really good is happening. State and federal support and then just local action I think is what’s driving it. People who want to eat better and do better for their bodies and their families and their communities.”