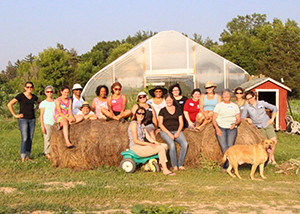 Twenty women enter a fluorescent-lit room. They organize and help themselves to a spread of foods they’ve prepared–kale and arugula salads, lemon meringue pie. They take their respective seats, pens and notebooks at the ready. An hour lapses, and they’ve already discovered a familiar conundrum: as female growers and producers of food, what title do they give themselves?

This was one of several questions raised at the women-in-agriculture pilot program led by nonprofit Michigan Food & Farming Systems (MIFFS). Designed to explore ways to engage female farmers in the cities of Flint, Detroit, and Lansing, the project, which ran from February to September of 2014, offered a series of meetings and excursions in which women who raise farmland explored their realities, challenges, and futures.

A number of sociological topics governed the gatherings, giving way to discussions about infrastructural improvements. Female farmers face many of the systemic structures plaguing women in nearly every industry: the frustration of not being taken seriously and the pressure of balancing professional pursuits and family life (especially with young children), to name a few.

What’s more, the popular perceptions of agricultural titles reveal a lurking form of discrimination. When asked to identify their positions in agriculture, most women used the terms “grower,” “producer,” and “gardener.” “Farmer,” on the other hand, was the least-used term.

“There’s a bias because it’s a woman, and that’s not traditionally who we see as ‘the farmer,’” says MIFFS Executive Director Michelle Napier-Dunnings. “What these women most appreciated was, wow, it’s not just me.”

As some participants revealed, the history of farming as a male-oriented practice causes these problems to surface in tangible ways. Conventional agriculture relies on heavy machinery–large tools and vehicles powered by substantial upper-body strength. Not all of these tools are compatible with the bodies of women farmers, many of whom channel most of their strength into their lower bodies, and thus might feel discouraged by the incumbent physical process. While many women can adjust–and have adjusted–to these structures, the participants’ discussion begged the question: why should they have to?

“We discussed changing those tools and how things are lifted,” Napier-Dunnings says. “It doesn’t mean a woman’s body can’t adapt to that, but it wasn’t designed for a woman’s physique to manage it. A number of the women talked about that, and if things are more difficult for somebody to do, then they’ll shy away from it.”

While the program’s conversations reflect topics affecting women farmers throughout the country (and, often, world), they’re particularly relevant in Michigan, rendering it a prime locale for an experiment of this nature. According to a report from MIFFS, the number of Michigan farm acres in which women are the primary operators has more than doubled in the last 30 years. This change is attributed in part to shifting ideologies–namely, a growing collective consciousness of environmental resources. It’s also a result of vocational vicissitudes. Many women farmers are former automotive workers; after the industry began to decline in Detroit, they found their skills and experience with physical labor translated organically to the act of tilling and harvesting land.

Furthermore, Michigan has an active, growing urban-farming community, which affords new farmers some unique opportunities. According to Napier-Dunnings, urban areas like Detroit are among the easiest locations for beginning farmers to find a plot of land and connect with both a community of growers and a market of buyers, largely because of high population density.

“Those new farmers are interacting with women who want to get involved, so there’s a big sharing of energy and enthusiasm,” she says. “So if somebody sees a farm going up and it’s right across the street from them, it increases that energy and connection.”

The state is also home to both established and emerging communities of female farmers of color, many of whom remain underrepresented and underserved in the agricultural space. Multiple generations of African-American farmers populate Southwest Michigan, Napier-Dunnings says, while increasing numbers of Latino farmers are moving in from the Chicago area. Accordingly, Napier-Dunnings says, it was crucial for the MIFFS project to include women of color, who could tap into a social support system from those who could not only educate, but empathize.

“Everything we do is looked at through the lens of, where are the inequities and how do we create a process that includes anyone who is interested in being involved, and that creates education, activities, and results that have thought a lot about social equity issues?” she adds.

Despite the program’s conclusion, its ethos survives. Meetings continue to be held regularly, and the nonprofit has secured a USDA Beginning Farmer grant in conjunction with Michigan State University to fund a series of intensive skill workshops. Additionally, MIFFS is implementing a farm site in concert with Genesys Health System for a three-year project in agricultural development.
“We are going to learn just as much as every single new farmer that comes onto that space for a workshop or actually decides to have a small plot of land to try to do some growing themselves,” Napier-Dunnings says. “It’s creating a wonderful relationship between the resources in that community with those that are going to need them.”