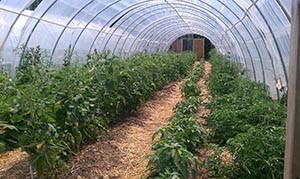 Urban farmers in the city of Baltimore will soon qualify for a 90 percent property tax break under a bill recently approved by Mayor Stephanie Rawlings-Blake. The move, which is the latest in a series of tax-break initiatives for city growers seen in areas like San Francisco and Washington, D.C., is intended to bolster local production of healthy food.

Drafted by Councilman William “Pete” Welch, the bill, which will likely go into effect next month, gives a tax credit to farmers who make at least $5,000 per year selling crops and raise no more than five acres of land.

The initiative came about in response to a Maryland agricultural tax law, says Abby Cocke, Environmental Planner for the Baltimore Office of Sustainability. Under the law, farmed properties of five acres or more qualify for a tax credit. But most urban farms in Baltimore don’t meet the size criterion. In fact, Cocke says, the average urban farm in Baltimore occupies about one acre, meaning most of the city’s farming parcels have netted no tax benefits, no matter how fruitful.

“The state legislature said, ‘here’s some enabling legislation that lays out some guidelines; come up with your own tax bit.’ What we were trying to do is get people to a comparable level of what they would get at the state level,” Cocke says.

One of the bill’s primary objectives is to encourage people throughout Baltimore to farm, which the city hopes will improve residents’ access to fresh, healthy food, regardless of income or neighborhood. It’s an imperative aim hardly lacking in ambition: roughly 25 percent of Baltimore is classified as a food desert, or “area where the distance to a supermarket is more than a quarter mile, the median household income is below 185 percent of the federal poverty level, over 40 percent of households have no vehicle available, and the average healthy food availability index score for supermarkets, convenience, and corner stores is low,” according to the Baltimore Food Policy Initiative.

The fundamental cause of such scarce accessibility to healthy food, Cocke says, is the city’s population decline. For about six decades, Baltimore’s resident count has decreased, sinking from nearly one million in the 1950s to its current total of around 622,000. The gradual exodus left an accumulation of vacant homes and empty, unattended land eventually riddled by overgrown plants and illegal dumping. The remaining active properties’ values flumped, driving out ever more residents and business owners–including grocers.

Consequently, current conditions on most of the vacant land remain less than ideal; spaces can be small, steep, or paved over with gravel. Anticipating these hindrances, the city has proposed a series of plans to make farming space more hospitable to new farmers–including a grant proposal to the Environmental Protection Agency for soil testing and remediation–and is seeking parcels of an acre or more to lease to qualified applicants.

An increase in the amount of farmable land, Cocke hopes, will spur opportunities for poor, unemployed, and underemployed Baltimore residents. Additional farms will likely create a a handful of jobs and training opportunities per parcel, for instance. They may also broaden access to fresh produce for people on food assistance; the organization Farm Alliance of Baltimore City offers a shared EBT machine for purchasing food from urban farms. Finally, because transportation costs are minimal, food from local urban farms will likely cost less than produce at a farmers’ market.

To Cocke, the tax break’s greatest benefit is its potential to clean, fill, and beautify the city, which she expects will restore the economic health and confidence both of Baltimore and of its residents. “There will be people here every day using the land for positive purposes, and it’s just a good thing.”