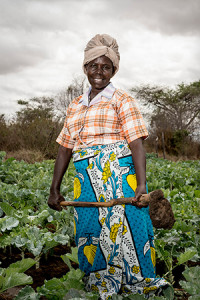 Since 2005, Coca-Cola has engaged in more than 386 Community Water Partnership projects in 94 countries to provide watershed protection; access to water and sanitation; water for productive use, such as agricultural water efficiency; and education and awareness programs. (photo courtesy of Coca-Cola)

Big food is on the run.

And the local food movement has prompted many large food corporations to realize that if they want to continue to earn profits, they must up their games in the sustainability arena.

But are these companies making real change, or just PR?

Seedstock reviewed the sustainability efforts of 11 big corporations. We also spoke with Marion Nestle, Paulette Goddard Professor of Nutrition, Food Studies, and Public Health at New York University and author of Food Politics: How the Food Industry Influences Nutrition and Health. Our goal: to better understand the scope and impact of big food companies looking to capture the local and sustainable food marketplace.

One thing is clear: big corporations are not going away anytime soon.

“I tend to think [corporate sustainability efforts] are for public relations purposes,” says Nestle. “Coca-Cola, for example, funds any number of national and international recycling programs to clean up the mess made by discarding soda containers. This shifts the burden of cleaning up the mess to consumers. At the same time, the soda industry strongly opposes recycling legislation that puts a refundable ‘tax’ on containers, even though such laws have been shown to increase recycling. Coca-Cola has reduced the amount of plastic in its bottles and is working hard to reduce its water ‘footprint’ and it wins prizes for doing so. But water issues—reduction of water tables, pollution, the amounts required to grow sugar or corn—plague the company.”

Here’s our rundown of 11 big corporations’ efforts to improve their sustainability profiles.

“Our mission is to offer the highest quality, least processed, most flavorful and naturally preserved foods,” reads the company’s website. “And we believe companies, like individuals, must assume their share of responsibility as tenants of the Earth.”

As a food and grocery company, Whole Foods tries to live up to this ideal by sourcing organic produce and meat that is free from hormones and antibiotics, as well as non-organic foods with fewer pesticides.

Every Whole Foods location features a “TAKE ACTION CENTER,” which provides customers information on issues such as sustainable agriculture, genetic engineering, and more. The company is also the only retail representative member of the National Organic Standards Board.

Whole Foods was the recipient of a “Green Building” award for its Austin, Texas headquarters.

Executives at WhiteWave Foods recognize that a growing number of consumers want food free from genetically-modified organisms (GMOs), or at the very least want to know which foods they buy contain GMOs. WhiteWave Foods supports mandatory labeling for foods that have GMOs as ingredients, and some its foods are intentionally GMO-free.

Food under its Silk label is GMO-free, and is overseen by The Non-GMO Project verification program. In North America, WhiteWave’s Horizon brand foods also contain no GMOs, which is a stipulation to be organic-certified by the United States Department of Agriculture.

Earthbound Farm, a large organic producer that was purchased by WhiteWave, uses salad packaging made from 100 percent post-consumer recycled plastic.

The world’s largest grocery chain is Walmart, which is working with its suppliers to increase sustainability at every level of the supply chain. Walmart initiated a pilot commodity optimization program by collaborating with 15 of its suppliers, which comprise 30 percent of Walmart’s food and beverage sales in North America.

The program provides farmers with the necessary tools to make tilling and fertilizer practices as efficient as possible on corn and soybean farms. A total of 2.5 million acres are included in this project, which is projected to reduce greenhouse gas emissions by 2.3 million metric tons.

Heinz, through its Global Agriculture Program, strives to further the principles of “productivity, prosperity, and environmental stewardship through long-term farm management.” Stressing health, the environment and economic and social benefits, Heinz experts share information with farmers around the world how to grow tomatoes in a more efficient and sustainable manner. Heinz stresses drip irrigation, hybrid tomato seeds that require less water, pressurized systems that irrigate with more accuracy, and minimizing water runoff. In cooperation with other companies and the University of Aberdeen in the United Kingdom, Heinz helped develop the Cool Farm Tool, a computer program that estimates greenhouse gas emissions resulting from various crop-planting processes.

Dannon, famous for its yogurt and other dairy products, is a subsidiary of French-based Danone. Dannon’s dairy plant in Fort Worth, Texas receives milk from McCarty Family Farms in western Kansas. The farm has its own condensing facility so it can supply Dannon with condensed skim milk and pasteurized cream.

“Condensing the milk on-site reduces the environmental impact of shipping and allows for the on-farm use of water retrieved during condensing,” says Lexie Layman, communications and community affairs associate for The Dannon Company. “This ‘cow to cup” practice demonstrates our commitment to continually looking for better ways to do business for our communities and environment.”

Danone reduced its worldwide carbon footprint by 37.4 percent between 2007 and 2013 while Dannon reduced its carbon emissions by 11 percent in the same timeframe.

By 2020, Campbell’s aims to reduce its greenhouse gas emissions and water usage by 20 percent and its nitrogen application by 10 percent. Campbell’s has also engaged in renewable energy initiatives, including a solar panel field in Napoleon, Ohio; wind turbines; and biodigesters.

Australian-based Wesfarmers achieved an 8 percent reduction in emissions during 2014. With more than 200,000 employees, Wesfarmers is the largest private employer in Australia, and agriculture is among its many endeavors.

Besides its emission reductions last year, Wesfarmers decreased its landfill waste by 6 percent and increased the amount of waste it recycles by 10 percent. With the exception of reclaimed water, the company reduced its water usage by 4 percent. Coles Supermarkets, an Australian chain owned by Wesfarmers, has committed to only selling certified sustainable palm oil by 2015.

Nestlé, headquartered in Switzerland, pursues a sustainable agriculture initiative focusing on numerous commodities, which include milk, coffee and cocoa. Nestlé strives for sustainability in the areas of irrigation, greenhouse gas emission and farmer income. The initiative kicked off in 2001, and in 2007, Nestlé Colombia initiated “silvopastoral dairy farming,” an endeavor designed to increase milk production by combining a diversity of trees, shrubs and hedges on the same land used for cow grazing. This increased biodiversity led to more forage for the cows, which in turn bolstered milk production.

Nestlé has assisted dairy farmers in Mexico with building new biogas digesters, and it has introduced water-saving methods to coffee farmers in China.

At Coca-Cola, company leaders know the high importance of water, as it’s one of their vital supplies. To this end, Coca-Cola has set a goal to replenish every single gallon of water it uses by 2020. Water conservation is just one part of an overall effort by Coca-Cola to advance sustainable agriculture.

Through its sustainable agriculture initiatives, Coca-Cola sets sustainable standards in sourcing ingredients, it works with partners in improving crop yields and lowering the costs of crop production, and it works with farmers in reducing pesticide use and making the most out of fertilizer applications.

Finnish food retailer Kesko ranks fifth in the Global 100 Most Sustainable Corporations in the World, and has been on this list since its inception in 2005. Kesko’s energy consumption dropped by 7 percent since 2014, and carbon dioxide emissions dropped by over 5,000 tons during the same time period.

In fall 2014, Kesko was recognized by its inclusion in the Dow Jones Sustainability Indices. It was specifically honored for its work in supply chain management sustainability.

More than 1,000 companies from 33 countries and 60 industries have become Certified B Corps, working to redefine what it means to succeed as a business. To become certified, a company must meet certain benchmarks in creating value for customers, employees, the community and the environment. Standards are developed by the Standards Advisory Council, an organization comprising experts in business in academia.

According to Nestle, the biggest hurdle for big corporations is admitting responsibility.

“Companies will perform whatever sustainability efforts they can without hurting the bottom line too much, but will do anything they can to avoid having to take responsibility for creating environmental problems in the first place,” says Nestle. “This is more of a problem for publicly traded companies than for those privately held, because of pressures to increase shareholder returns.”