Indoor farms can also be placed anywhere – including in the middle of a city, in vacant warehouses and on land that is often much cheaper than arable land. That indoor farms can be placed in cities also enables them to provide more local food access to buyers – from restaurants and institutions to wholesalers and supermarkets.

To discuss the potential of indoor farming in cities Pierre Sleiman, founder and CEO of Go Green Agriculture, an innovative company that grows local, premium quality leafy greens inside high-tech greenhouses using hydroponics, will participate in a session at the upcoming GrowRIVERSIDE: Future of Local Food Conference entitled “The Local Food Potential of Indoor Farming in Cities.” 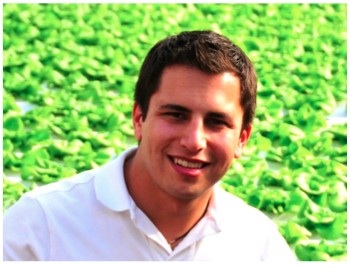 Pierre has become involved in the mission of accelerating the movement towards local and sustainable farming and fostering interest in youth to choose agriculture as an exciting career. Pierre was recently named a “Champion of Change” in the “Future of Agriculture” by President Obama. He was named as one of the “50 People to Watch in 2013″ by San Diego Magazine and was recently elected to the Board of Directors of the San Diego Farm Bureau.

GrowRIVERSIDE is only 20 days away, so click on the link below to reserve your spot to hear Pierre discuss how he developed a successful hydroponic growing operation in Southern California and the potential for indoor agriculture in cities: