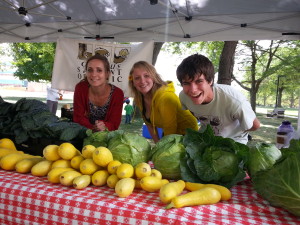 Despite the lack of a robust agricultural program at Oakland University, located in Rochester Hills, Mich., a growing movement to fuse ecology and sustainability into the curriculum of this science and arts driven academic institution is emerging.

Both undergraduate and graduate students can gain 12 to 13 credits working on OU’s student organic farm and up to 20 total credits with cross-disciplinary electives that focus on the history of agriculture and food system development.

The idea for the Oakland University student organic farm started with a group of business students and environmental science majors who wanted to start a small campus garden to feed the hungry. Dr. Fay Hansen, a biomedical scientist and professor at the university, had recently undergone a professional shift of interest. After spending time during her sabbatical with students at Michigan State University on their 10-acre student organic farm, Hansen was considering switching her research focus to ecology and the study of native plants. Upon her return to Oakland University, she linked up with a motivated group of student gardeners and the idea of an organic farm was born.

The student garden had meager beginnings. The group was granted marginal land isolated from the greater campus area, making it hard to integrate the garden into mainstream campus life. Another difficulty was that it was being run by students who were about to graduate, creating an unsustainable staff for a long-term project.

Undaunted, Dr. Hansen secured important funding through Learn and Serve America! given out through Midwest Campus Compact Consortium, an academic group that focuses on experiential learning. This grant helped the garden turn the corner from a small, student-led enterprise to credit-based classes, as required upon receipt of funds. Dr. Fay Hansen was able to hire an organic farm coordinator and former student, Jared Hanna, to help develop coursework and grow the garden into a production-oriented organic farm and learning center.

“At first people gave us a weird look, as we were trying to sell fresh veggies on campus, but we won the hearts and stomachs of students,” Hansen explains. The student organic farm has thrived in the academic atmosphere of Oakland University. Sales at the seasonal farm stand have allowed the students, faculty, and greater Rochester community to share in the abundance of food grown on site and has also helped the program pay student body staff and buy equipment. The farm stand hosts over 100 customers during its days of operation.

Season extension is now possible at the farm as well, with the recent addition of a 30 x 96 foot passive solar-powered hoop house which Hanna uses as a living classroom.

“We wanted to engage as many classes as we could so we arranged to do it over several months. The students were able to gain ownership by having involvement,” says Dr. Hansen.

The organic farming program at Oakland University also explores permaculture education with a class called Permaculture Theory and Practice. Due to the historic protection of the location (the campus is located on a National Historic Landmark site), there are some restrictions to making permanent changes to the farm.

“We would like to plant fruit trees and make some design changes but we don’t have much extra space – it is a historic site,” says Hanna. “We build redundancy into our models, using cover crops, vermicomposting, mulching and soil building to reinforce permaculture principles.”

“Students are very in-tune with our needs. Some students have a linear track mind from A to B systems production, with spreadsheets and calculations. Permaculturists are nonlinear and think outside the box. We need both in farming,” Hanna explains.

The farm also maximizes water management techniques by building redundancy into the water systems. They plant densely, mulch under crops and keep soils high in organic matter for water retention. Because of the sandy loam soil at the farm, moisture is kept at 8 to 10 percent. Drip tape is manually controlled and customized to what is growing.

According to Dr. Hansen, the farm still has some obstacles to overcome.
“The challenges are in the academic side and that this is a historic site. There is not a good understanding of what the needs are. They appreciate us, but they don’t understand the financials of farming on a little over a half-acre,” says Hansen. “It is different from being an individual farmer where you can call the shots. There is a lot of red tape. The site is a little bit difficult to get to and link into the system. Our pride is that not only are we still here but we are growing.”