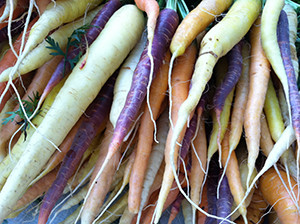 If there’s one unifying theme in the city of Portland, Maine, it’s food.

The city has one of the highest restaurant-per-capita rates in the United States. Situated on the Atlantic Coast, it harbors an intimate familiarity with edible seaweed, fish, and crustaceans. And, perhaps most important, it’s home to a growing local food movement, involving everyone from co-op founders to City Hall.

Situated on the Atlantic Coast, it harbors an intimate familiarity with edible seaweed, fish, and crustaceans. And, perhaps most important, it’s home to a growing local food movement, involving everyone from co-op founders to City Hall.

Portland’s fervor for edibles came to municipal fruition in the summer of 2012, when Mayor Michael Brennan introduced the Mayor’s Initiative for a Healthy and Sustainable Food System. Enacted in response to a Community Food Forum, the initiative aims to improve local food system policies, produce as much food locally as possible, and increase accessibility to healthy food for residents throughout the city.

One of the initiative’s largest focuses is the Portland school system. Steering committee member Ron Adams spearheads an effort to ensure that 50 percent of each lunch sold in Portland public schools consists of locally-grown food by 2016. (Adams defines “local” as within 300 miles of Portland.) Currently, each lunch is composed of approximately 35 percent local food, with 20 percent sourced from Oakhurst Dairy in Portland, according to fellow-Steering Committee member Jim Hanna.

“Over the course of the past three years, the percentage of local foods jumped up from about 25 percent, including dairy which increased to about 35 percent. Hopefully next year we’ll be able to jump to about 50 percent local food for the Portland schools,” says Steering Committee member Jonah Fertig.

The school-lunch program is designed to fulfill another facet of the initiative: to increase access to healthy food for low-income residents. Refugees from war-torn countries in Africa and the Middle East are immigrating to Portland, and their children are attending its schools. As a result, the city is seeing growing numbers of young families with limited incomes (approximately 50 percent of students in Portland public schools are eligible for free school meals, Hanna says). Access to the same locally grown food as their peers, then, helps level the proverbial playing field.

The initiative has also galvanized the expansion of farms and gardens. The city has contracted with a nonprofit called Cultivating Community to manage its current community gardens, which have piqued the interests of its residents. (The city oversees four gardens containing 118 plots; about 160 residents are on a waiting list to rent a plot, by Hanna’s estimate.) Fertig says a new garden overlooking the Atlantic will be available later this year, which he hopes will inaugurate an active development campaign to match the demand.

In conjunction with these gardens is a collection of 40 fruit trees known as the Mt. Joy Orchard, a communal site designed to provide additional produce for poorer families, as well as the Fox Field Food Forest, a planned source for fruit trees and berry bushes, which is slated to be planted in a low-income neighborhood. In further efforts to broaden citizens’ food access, the city recently unveiled one of its first rooftop gardens at a new housing project.

“We’re excited to see the expansion of the community gardens, but we also need to make sure the location of the gardens is accessible to people with limited income,” Hanna says.

Goats offer a number of ecological advantages, Moon says. Unlike mowing machines or weed-killing chemicals, they won’t pollute the land or air. Their manure also contains nitrogen, which can enhance the fertility of the soil. What’s more, they’re often able to trim rocky or precipitous areas, which a standard machine might not be able to reach.

Currently in search of a goat shepherd, Moon hopes to launch the project by the end of summer. “We’re interested in promoting local agriculture and local small businesses. This might be a way for someone who raises goats to supplement their income,” he says.

Members of Portland’s local-food movement acknowledge a formidable set of challenges–including competing interests in land development and corporate agricultural investors–but they remain optimistic about the initiative’s potential. Even if municipal support wanes in the next mayoral election, advocates are confident the sentiment and dedication to sustainability will persist.
“I would encourage other cities to collaborate with city officials and city staff. At the same time, we have to recognize the importance of the grassroots energy,” says Fertig. “We’re looking at how to strengthen and establish an independent but connected structure so that we’re able to move forward with our work, regardless of who’s in power at the city level.”