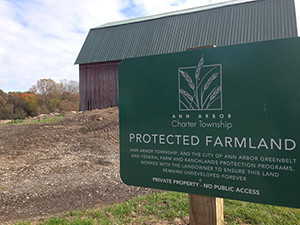 In a massive community effort to preserve prime farmland, the community in and around Ann Arbor, Michigan pulled together to create Tilian Farm through a tapestry of groups, grants and conservation-driven policy.

The process has not been without its challenges, however, with Tilian going through several iterations in an attempt to become a thriving farm incubator and food hub.

After a collaborative process, management of this important entity in the local food system was assumed by MIFFS (Michigan Food and Farming Systems) in 2015, generating a wealth of excitement among agriculture enthusiasts in the region.

During the economic downturn of the last decade, the area that is now Tilian Farm was slated for development. As the great recession rolled in, real estate values plummeted and the community had an incentive to preserve it. The township’s Farmland and Open Space Preservation Board signed off on the project in December 2010 and a lease for 16 acres was signed with the Township in 2011. Another parcel was added in 2014, bringing the farm to 44 acres.

Tilian Farm is safeguarded through Greenbelt Legislation, a Farmland Preservation Group, and a conservation easement. Right-to-farm protections are written into the lease agreement. Nifty Hoops provided a grant for four agricultural seasons, making hoop houses and season extension a large part of the farm’s productivity plan. Additional funding was secured through a federal Beginning Farmer and Rancher Grant.

According to MIFFS executive director Michelle Napier-Dunnings, the organization is folding Tilian into a strategic plan devoted to supporting the many faces of farming. Tilian is the third farm center that MIFFS is involved with, and they are working to co-create a collective vision for the farm’s future with the incubator farmers on site.

“Tilian Farm is a wonderful place where people and the township surrounding the farm and farmers came on with tremendous passion,” says Napier-Dunnings. “Everybody is working really, really hard. There is tons of excitement and tremendous agreement that this is high value, and we are fundraising now to support the farmers’ plans as well as the vision of the township and community. MIFFS is making sure that happens.”

Fundraising has become especially important for Tilian over the last year. During the management transition from the Food Systems Economic Partnership to Michigan Food and Farming Systems (MIFFS) Tilian completed its federal grant. MIFF is currently seeking foundation money to cover the loss of that revenue until they can reapply for federal aid.

Despite the setback, MIFF has hired Stefanie Stauffer to manage the farm. Stauffer brings extensive experience and is charged with pulling together an incubator cohort that is much larger than ever before.

Tilian Farm grew from three farm projects in 2014 to twelve in 2015, representing unprecedented growth as a response to the excitement generated with the MIFF takeover and the local food movement as a whole. The farmers rotate in three-year segments, gaining experience and building their farm businesses as they seek more permanent areas of operation. In its previous incarnation, Tilian had a smaller cadre of farmers who clearly had education, training or enough experience to present a viable farm plan they were working toward. MIFF has reached out to a broader spectrum with some farmers who are very new but who add a great deal of energy to the incubator community.

Located at the urban periphery, Tilian has access to a wealth of direct sale opportunities for its farmers to access. One cohort has found success growing for the brinery nearby. Previous cohorts have successfully started their own farms, and even farm manager Stauffer capitalizes on the thriving local market with her salsa company, Nightshade Army Industries.

The influx of different levels of expertise and enthusiasm has brought diversity and innovation to Tilian. Aquaponic projects are emerging in the hoop houses. Permaculturists practice no-till cultivation, including a Korean farmer who boosts her seedlings with kimchi and is introducing Asian permaculture techniques. One farmer is raising laying hens and growing feed grain on separate acreage. An apiary has just moved in, with beehives arriving only weeks ago. The apiary is expected to continue at the site even after the farmer who started it has moved on. In this way, Tilian is expanding each season and with every new farmer.

Also under construction is a massive vermiculture composting system, which is being installed by Star Valley Farms and will process up to 1000 pounds of weeds, chicken manure and rotting vegetables a week. The vermicomposting program will provide soil for Tilian Farm and is expected to become a source of revenue, as Ann Arbor restaurants discover the local composting facility. Building the system will also serve as an educational component for the farmers who will then manage it.

Even as Tilian develops its identity within the greater community, subdivisions are being developed all around the farm. Stefanie Stauffer speaks hopefully about the housing that is beginning to surround the property,

“We are pretty rural right now, but it is going to be a lot higher density soon. Luckily we just got approval to open a farm stand. The City of Ann Arbor has annexed land, and as the city expands it may shift what the greenbelt and periphery looks like. But on the bright side, we will have customers all around us.”