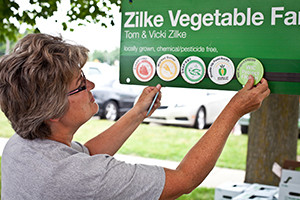 The Zilke Vegetable Farm in Milan, Michigan is one of many Michigan farms that has benefited from the Double Up Food Bucks program. (photo courtesy of Emilie Engelhard/Fair Food Network)

Actress Gwyneth Paltrow recently remarked how difficult her experience was of trying to rely on only food stamps for a week’s worth of food. Perhaps it would have been easier had she been able to take advantage of the Double Up Food Bucks program.

That’s because Double Up Food Bucks, run by the Fair Food Network (headquartered in Ann Arbor, Michigan), doubles the value of federal nutrition aid used at stores and markets that participate. Through this program, not only do low-income consumers have much greater access to fresh fruits and vegetables, but local farmers make more money and the economy benefits from more money spent on locally-produced foods.

Double Up Food Bucks got its start in 2009 at several farmers’ markets in Detroit, and has since spread to over 150 locations in Michigan. Through a 2013 pilot program, the program expanded to grocery stores.

Since its inception, Double Up Food Bucks has helped many farmers and thousands of low-income families.

Even though Double Up Food Bucks works differently at farmers’ markets and grocery stores in Michigan, the aim is the same—increasing accessibility to locally-grown fruits and vegetables.

To take advantage of the program at farmers’ markets, shoppers simply use their SNAP card to purchase eligible foods, which will be matched up to $20 for purchasing Michigan-grown produce. At grocery stores, SNAP cards may be used to buy at least $10 of qualifying fruits and vegetables, which will give the shopper a $10 credit to purchase Michigan-grown fruits and vegetables from the same store.

The program has been so successful in Michigan that other regions have shown interest. Hence, Fair Food Network has made available a toolkit that allows organizations all over the United States to implement Double Up Food Bucks. To date, it is available in Kansas, Arizona, New Mexico, Missouri, Ohio, New York, Utah, Oregon and Oklahoma, in addition to its home state of Michigan.

Now, Hesterman is looking to increase the presence of Double Up Food Bucks at farm stands. He is pleased at how the program has taken off.

“Fair Food Network’s greatest challenge has been keeping up with a very successful program,” he says. “There’s lots of demand and interest from the grocery sector.”

One of the strengths of the program is its uniformity and ease of implementation, according to Fair Food Network communications director Emilie Engelhard.

“It’s been a uniform program across the state, with uniform communication,” Engelhard says. “It’s one brand, the Double Up brand.”

The USDA has also noticed the high level of success, and as a result, granted the Fair Food Network about $5.2 million to help increase the number of fresh fruits and vegetables that go to people who rely on food aid. The Fair Food Network will use this money for the Double Up Food Bucks program.

The grants, which were made possible by the Food Insecurity Nutrition Incentive program, will be matched by private funding, for a total of over $10 million.

Despite the deep impact Double Up Food Bucks has already made in Michigan and elsewhere, Hesterman continues to look to the future. Some of his goals include partnering with 50 Michigan grocery stores by 2019, a year-round pilot program (currently it is only offered seasonally), and enabling shoppers to use a Double Up Food Bucks smartphone app. National, and even international, interest continues.

“We’re working with partners in other states to help get the program started,” says Hesterman. “Interested people from overseas have approached me about the Double Up brand. There’s interest in Europe, Africa and Latin America.”

In the meantime, Fair Food Network keeps on doing what it does best regarding the management of its Double Up Food Bucks program—providing a model for what works.

“We provide the toolkits and templates, the nuts and bolts,” says Engelhard.

The Little Library That Could: Advocates Change Seed Exchange Laws in Minnesota