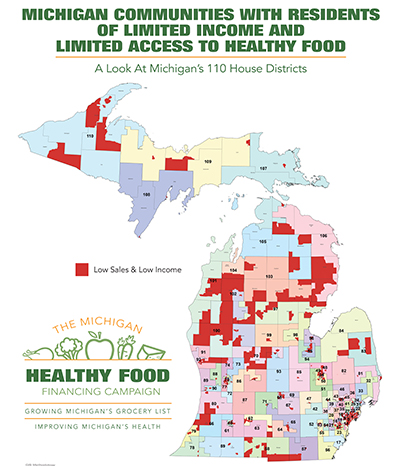 Hunger often hits children, who need nutrition to learn and develop, the hardest. Wanting to help solve this problem in Michigan, The Food Trust recently released a report outlining the scope of the problem and recommendations for an action plan.

“Michigan must address the significant need for fresh food resources in many of its communities,” the report begins. “A myriad of factors have created a shortage of healthy food resources in lower-income areas across the state, creating a public health crisis.”

In response to and in recognition of this problem, The Food Trust, based in Philadelphia, Pennsylvania, released Food for Every Child: The Need for Healthy Food Financing in Michigan.

One of the main malnutrition-causing problems is the existence of areas with little to no grocery access. Rural areas often suffer from minimal grocery resources, as do both rural and urban low-income areas.

“Groceries have revenue expectations,” says Deirdre Church, co-author of the report and project manager at The Food Trust. “There’s not much revenue in low-income communities. Stores take income into account; they know raw income, but not SNAP dollars.”

Communities of color are also often areas with a lack of grocery resources, according to Church.

“There’s a history of segregation and redlining, and history still has an influence,” she says.

Regardless of area, the report states that a lack of local food retail establishments has a profound negative impact on public health, often resulting in obesity and other ailments.

O’Dell recognizes the irony in the reality of food deserts in Michigan, which is second only to California in agricultural diversity. But a significant portion of the food produced in Michigan is shipped off to out-of-state processing facilities.

“How do we get food to stay in the state?” he asks.

The answer to this question comes in part from the work of the Michigan Good Food Fund, which works toward its mission of increasing access to local foods for Michigan residents via greater retail access.

So far, the Michigan Good Food Fund has procured $6 million from grants and low-interest loans, and O’Dell is trying to persuade state legislators to approve a total of $10 million.

“All pieces of the puzzle are on the table,” says O’Dell. “Many of the legislators are conservative, but a number of farmers and healthcare professionals are in the legislature.”

“We really need to continue to drive points home as to why this is so important,” Church says. “Three billion dollars of healthcare costs in the state of Michigan are due to diet. The investment in this program is small compared to health care costs. And, healthy foods attract economic development and create more opportunities for local farmers.”

Because healthy eating habits begin in childhood, Church and O’Dell believe this makes increasing accessibility to local foods an even more important issue for everybody.

“This is a nonpartisan issue,” says O’Dell. “Both democrats and republicans get it. Just look at the large number of heavy kids in our society.”

The Food Trust conducted a study with PolicyLink, which revealed that Michiganders who reside in areas without supermarkets suffer from much higher rates of obesity and health-related issues than to those who live in areas in close proximity to supermarkets.

“The report recommends the creation of a statewide healthy food financing program to incentivize healthy food retail development in communities of need and expand market opportunities for Michigan farmers,” concludes the report in its summary. “In cities and states throughout the country, such programs have improved healthy food access while creating jobs and strengthening the economic well-being of urban and rural communities.”

A similar food financing program was first established in Pennsylvania in 2004, with the support of the state’s Fresh Food Financing Initiative. It resulted in the addition of 88 fresh food retail stores, 5,000 jobs, and greater fresh food access for 400,000 Pennsylvanians.

The Food Trust hopes to replicate or exceed this level of success in Michigan.