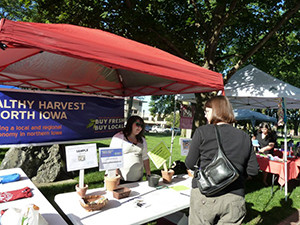 How do you measure the strength of a local food system?

Healthy Harvest of North Iowa is a network of community stakeholders, growers and consumers covering nine counties in northern Iowa with a focus on promoting sustainability in the food system.

The nonprofit recently contributed in a statewide impact survey conducted by the Regional Food Systems Working Group of Iowa. The survey measured the current state of local food in Iowa as well as possible solutions to improve its reach.

“It takes that personal relationship and that’s really what the whole report is based on. In terms of us trying to leverage more resources to help promote local food work this information is very important,” says Jan Libbey, administrator for Healthy Harvest of North Iowa. “So we have tools that we can go to our decision making bodies and our funders in our region and say get on board, this is important stuff. And it is making a difference to our area,” says Libbey.

Libbey considers the survey data a powerful aid to convincing community stakeholders, business leaders and investors of the economic potential of regional food systems. “They are still in the mentality of chasing smoke stacks and don’t quite understand agricultural entrepreneurs ought to be in their portfolio,” says Libbey.

The report, “2013 Economic Impacts of Iowa’s Regional Food Systems Working Group” was completed late in 2014. By interviewing 103 local food producers and 74 wholesale vendors, the RFSWG, which represents 90 of Iowa’s 99 counties, worked with the Leopold Center for Sustainable Agriculture to measure, analyze and evaluate the data.

“Keeping track of efforts and impacts is important for leveraging new resources and keeping both stakeholders and the public engaged in and apprised of this work to ensure we have the support needed to keep the work moving forward,” says Corry Bregendahl of the Leopold Center for Sustainable Agriculture who, along with Arlene Ederton, designed the regional impact survey.

The survey tracked information on local food sales, local food buyers and local food jobs in 2012 and 2013. The data was then broken down to help regional groups like Healthy Harvest of North Iowa use information specific to their region.

Overall the survey showed an increase in local food sales from 2012 to 2013. There were 171 new local food jobs over the two year period. A total of $1.6 million was leveraged by the regional coordinators for their work in local food including grants, fundraisers and fees. The survey showed that food sales to and through food hubs were “rapidly eclipsing direct-to-consumer sales” such as those found at farm stands and farmers’ markets.

“The Leopold Center provided $47,600 to the Iowa Food Coop in 2008, long before the term “food hub” had gained much traction,” says Bregendahl. “Since then, similar efforts have blossomed across the state with new variations on the same theme: to provide families and now, businesses, greater access to healthy locally grown food.”

By connecting with both buyers and producers, Libbey has a clear picture of North Iowa’s regional food system. Tracking areas of growth and decline helps determine funding allocation and future programming. Libbey agrees that food hubs would help with the aggregation of local foods but so would better tracking of local food by wholesale buyers.

In a recent review of the local food aggregation process with a produce manager Libbey discovered more areas in need of tracking.

“I asked them can you tell me now what percent of your fresh fruits and vegetables coming into the store is local. They don’t even have that data,” says Libbey. An improved PLU system and employee training on identifying local produce in grocery stores would, according to Libbey, help measure local food impact in the region.

“My goal is that the group generates a set of next step recommendations for local food system work in North Iowa. We will continue to focus and maintain our expertise on the local food producer piece but I’m hoping that this will help others take greater ownership of their local food system,” says Libbey.

Healthy Harvest of North Iowa is now conducting research on local food producers. The data will help focus the organization’s programs and initiatives. Download the results of the two year impact study at the Leopold Center for Sustainable Agriculture.