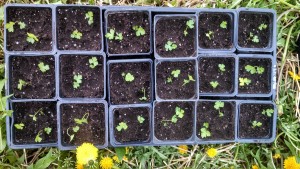 A possible new food hub is on the horizon in DeKalb, Illinois.

Dan Kenney of DeKalb County Community Gardens came up with the idea after seeing the success of community gardens in the county. The countywide community garden project kicked off in 2012, and now boasts 40 different locations.

“We try to promote local food and local farmers, and we heard that food hubs are a key component in local food,” Kenney says.

He believes that a food hub located in DeKalb County, located west of Chicago in the northern part of the state, would have a major advantage just due to its geographic location. Interstate 88 (which runs east and west) and Interstate 39 (north and south) traverse through the county, which is in relative close proximity to Chicago, the Illinois-Wisconsin state line and the Mississippi River. Kenney is also encouraged at the success of food hubs elsewhere in the state, including Peoria and Chicago.

If the DeKalb food hub becomes a reality, Kenney and his co-organizers envision it serving people within a 200-mile radius that stretches from Wisconsin south to Interstate 80 and west to the Mississippi and east to Chicago. But things are still in the planning stages, as a feasibility study is underway. Kenney would like to have the food hub in full operation by 2016.

“First we need to identify the number of farmers and buyers in the area who would use the food hub,” Kenney says. “If there is adequate interest, then we start moving.”

If the interest level proves satisfactory, Kenney says the next challenge would be to raise enough startup capital. Part of the strategy will be to keep costs down through obtaining an existing building to use for the hub, rather than having to build an entirely new structure.

“We’re trying to identify unused or vacant warehouses that we could use,” he says.

Of great interest is a building already set up for food production that is located next to a freeway.

Kenney says that of the food hubs in the United States, about half are nonprofit, 20 percent are co-ops and the rest, about 30 percent, are for-profit operations. He says that organizers are looking at a variety of options, one of which is becoming an L3C, or a limited liability, low-profit company, a hybrid of sorts between a nonprofit and a for-profit. They are also examining the possibility of obtaining social impact investing and/or USDA grants.

“We would put out a job posting for someone to become an operator,” says Kenney.

And even though the DeKalb food hub is not yet a sure thing, Kenney and others are getting the word out via the Internet, public forums and networking, as well as reaching out to possible wholesalers and buyers.

“We want to reach the grocery stores, wholesalers and co-ops, including Whole Foods Market, Trader Joe’s and Hy-Vee,” he says.

Another push is educating the public about what needs a food hub meets.

Kenney and his cohorts will also continue to visit food hubs in the region, including ones in Peoria and Madison, Wisconsin, to continue to learn all they can.