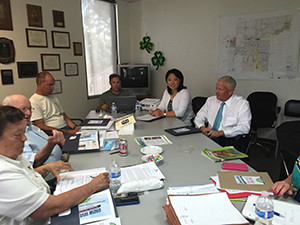 The RFSA started meeting last September, and on April 16, it will present its action plan to the Riverside City Council for formal adoption.

“The City Council is enthusiastic,” Conlin says. “The key was recruiting people who want to be stakeholders.”

Goals of the RFSA include promoting sustainable agriculture and the economic viability of agriculture in and near Riverside, advance agricultural economic development and infrastructure, foster education about food and agriculture, promote equitable access to affordable and nutritional foods, enhance public health, and remain responsive to stakeholders.

Conlin is impressed by how smooth the process was of launching the RFSA and continuing its momentum.

“It’s been remarkably cooperative and smooth,” he says. “People have been very enthusiastic, even during three-hour meetings. It’s extraordinary.”

Hassan Ghamlouch, a farmer and employee at the University of California, Riverside, serves on the RFSA to “keep out the encroachment of urbanization and enrich the community with policy.”

“There’s not enough money in farming; that’s why I have a full-time job,” Ghamlouch says. “Most area citrus growers lose money. That’s why we have to go outside the community to get a decent price for the produce that we grow. We should be able to sell within the community.”

Recently, Ghamlouch approached a grocery in Riverside to gauge its interest in buying his produce. Grocery management told him they obtain their citrus fruit from a large conglomerate.

“Our system is screwed up,” says Ghamlouch. “We’ve been farming this property for three generations; I want to keep it viable for the next generation.”

As excited as he is about the RFSA, if adopted on April 16, he hopes the initiative and the ideas behind it don’t just collect dust—rather, he hopes and expects the momentum to continue.

“I hope that the people formally adopt it, that the citizens take ownership and make it their policy,” he says.

Riverside farmer and RFSA member Charlotte Davidson feels the same way, yet she knows how difficult it can be to get people on-board with a project and to maintain that level of excitement.

“It’s often hard to get ahold of family farmers,” she says. “Many of them just want to make a living. I’m taking the morning off to come and participate (attend RFSA meetings). It’s a harder concept to realize that this is not just about yourself.”

But right now, people are interested in the RFSA, and Charlotte is optimistic about this continuing.

“The timing is right,” she says.

“This is an incredible opportunity to get to promote agriculture,” says Riverside Land Conservancy executive director and RFSA member Gail Egenes of the RFSA. “I was involved in planning at the first Grow Riverside conference; this is an outgrowth of that.”

The mission of the Riverside Land Conservancy is to preserve open space and agricultural lands, and she views the goals of the RFSA as complementary—to educate people about and create a marketplace for locally-produced food.

Diana Ruiz, public affairs manager for the Riverside-Corona Resource Conservation District, is involved with the RFSA because its mission is parallel to her employer’s: to sustain and conserve natural resources.

“I’m interested in helping the coalition build capacity and develop a network for the Greenbelt,” she says. “I’m excited to collaborate in getting information out about where local foods are accessible.”

Ruiz believes that the work of the RFSA will make Riverside a healthier community and boost agritourism, as well as raise the value of agriculture in the minds of the people and help with the local economy. She’s also hopeful of the role of agriculture in enhancing Riverside residents’ sense of what makes their city home.

“Local foods create a better sense of community where people feel more connected,” she says. “There’s a greater quality of life when you sense you belong somewhere. These are things we don’t always think about when go to the RFSA meetings.”