Urban Farming Ramps Up in Sacramento with Passage of New Ordinance 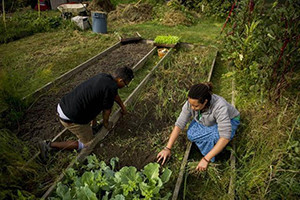 Food and agriculture activists have something to celebrate this year in Sacramento, California. On March 23, 2015, City Council passed an urban farming ordinance that paves the way for food security and an inner city agricultural economy. The 6-1 vote by council members makes specific changes to allow and promote urban agriculture and micro farms within city limits.

Advocacy groups such as Ubuntu Green worked with locals to build a coalition of support for the proposed ordinance. Top Sacramento chefs and restaurateurs also took an active role, sponsoring a letter with 39 prominent signatories urging the city to pass laws to allow for the city to become a robust model of integrated, urban food production.

Advocates used the City of Sacramento’s attempt to rebrand itself as the farm-to-fork capital of the U.S. as leverage, urging council members to build upon the recently passed California Urban Agriculture Incentive Zones Act and the California Homemade Food Act, which permits cottage food operations.

The new ordinance will allow micro farms to voluntarily enter into a contract with the city, which will reduce property taxes for sites with urban agriculture. It also allows for utilitarian farm structures such as hoop houses, out buildings, greenhouses, and farm stands. Urban agriculture includes but is not limited to community gardens, market and direct sale gardens, aquaponics, hydroponics, beekeeping and edible landscaping. The city already allows limited animal husbandry, which will not be affected by the ordinance.  The ordinance incentivizes urban agriculture on vacant lots.

And for the first time, the ordinance legalizes the sale of farm goods on residential sites. No insurance liability is required of proprietors. On-site sales can take place 7 days a week on vacant lots, while residential farm businesses can only operate on Tuesdays and Saturdays from 8 a.m. to 7 p.m.

“I’m in an impoverished area,” says Yisrael. “Once you sell something, you create an expectation, but I can only sell twice a week. I’m talking to a mother who is food insecure, and I have to tell her on Tuesday that she can’t come back until Saturday. I know they are trying to control commercial activity, but there is a whole underground commerce already. We should be trying to build legitimate business, and it could be controlled by limiting the hours of operation rather than the days of the week.”

Yisrael remains positive that the ordinance can be amended. It is scheduled to be revisited by city council in six month intervals. Yisrael is currently working to bring similar change to county laws.

The greatest obstacle to urban agriculture and food security is lack of knowledge, according to Yisrael, and the systemic problems that keep the inner cities in a state of depressed economical and physical health. Yisrael hopes to expand his educational  farm site and develop even stronger outreach into his community, helping to change the way people obtain food, think about food, and feed themselves and their families.

“The whole idea of urban agriculture is that there is a relationship being built,” Yisrael maintains. “We go beyond a food hub. We invite people over to dinner and we show them what we do. We teach by example, modeling healthy families and healthy food. We give a lot of food away, with recipes. We want people to start growing their own food.”