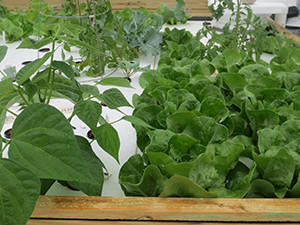 When a Benedictine sister at a St. Leo, Florida monastery wanted to do more in helping feed the hungry and heal the world, she did something a bit unexpected: she started an onsite aquaponics system.

Prior to this endeavor, Sister Miriam Cosgrove’s knowledge of aquaponics did not extend far. So last March, she sought the advice of experts at Morning Star Fishermen, an international aquaponics research and training center in nearby Dade City.

But there were still other hurdles to jump. First was the issue of funding. Second, the City of St. Leo wanted Holy Name Monastery to acquire a permit to start construction. This led to Cosgrove having to educate city officials about what aquaponics entails.

“Aquaponics is not a term many people know about,” she says. “The key is education.”

Finally, Cosgrove was worried that the monastery’s other sisters might not be as enthusiastic as she was about taking on such a serious project (not to mention that those at the monastery knew little or nothing about aquaponics).

In the end, the sisters gave their blessing.

“It was very energizing that they wanted it,” Cosgrove says.

By October 4 of 2014, everything was approved to move forward. But the construction process for the new facility posed its own challenges, and Cosgrove and her sisters still had a lot to learn.

“It was stressful to say the least,” she says. “But we lived through the pain to get to the good part. Now we are doing very, very well.”

The new aquaponics system made its debut in December, in what Cosgrove describes as a “Christmas Eve present.”

The system consists of 10 250-gallon tanks full of tilapia. Plants include lettuce, tomatoes, basil and cilantro. The sisters at the monastery are already benefiting from the bounty, and the aquaponics operation is attracting interested visitors.

In February, two priests, both named Father George, visited the monastery and its aquaponics facility. One priest is from Cameroon, the other from Brazil, and both were excited about the possibility of starting similar projects in their countries.

“People who come to us are thirsty for knowledge,” Cosgrove says. “People want to be a part of this, they want to learn.”

Cosgrove is among the learners, and she appreciates the personal growth she has gained by acting on her desire to learn about aquaponics.

“Fish farming is a new adventure. It has changed my life,” she says.

For as long as Cosgrove can remember, she has appreciated St. Francis of Assisi (her father and brother were both named for St. Francis) and his love for creation and Earth. The people at Morning Star, she says, did not only teach her about aquaponics, but about sustainable living. Now, she views the monastery’s new aquaponics operation as an outgrowth of faith.

“We need to wean ourselves from irresponsibility,” she says. “This whole thing is a faith project. I love everything that God has made, and it’s important to not go by the status quo, the way things have always been done.”

“As a sister, I had to take a vow of poverty,” she says. “But the world lives in dire poverty. We have to take care of our brothers and sisters.”

Until recently, Cosgrove was the sole operator of the aquaponics facility (with some volunteer help from students at adjacent Saint Leo University). But things have been going so well that she now has hired help. Future goals include growing papayas and moringa fruit, and producing a DVD explaining why the monastery has embarked on this new adventure.

“It’s getting to be pretty routine, but we’ve only just begun,” says Cosgrove, alluding to the song by The Carpenters.