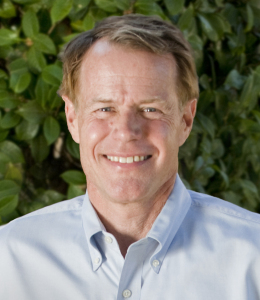 Ken Yeager, a Santa Clara County supervisor, is co-sponsor of a proposal that would give tax credits to landowners who use vacant or blighted urban land in the country for agricultural use. (photo courtesy of Ken Yeager)

Landowners and developers in Santa Clara County, California may have greater motivation to turn vacant lots into urban farms, if an Urban Agriculture Incentive Zone proposal by county supervisors Ken Yeager and Mike Wasserman is approved. The proposal was referred  to the  county’s Finance, Government and Operations Committee for review on February 10, 2015.

A recently passed state law, the Urban Agriculture Incentive Zones Act, was authored by Phil Ting, an Assemblymember from San Francisco. It enables cities and counties to create Urban Agriculture Incentive Zones that would provide property tax breaks for landowners who use their vacant, blighted or unimproved land for urban agriculture for at least five years. The act applies to properties between 0.10 acres and 3 acres in an urban area. California Governor Jerry Brown signed Assembly Bill 551 into law on September 28, 2013.

Home to Silicon Valley, Santa Clara County’s character is decidedly urban. But this was not always the case—since 1984, the county has lost 45 percent of its farmland. Not only would increased urban agriculture in the county reclaim land for agriculture, but would help reconnect residents with their food, increase access to healthy food for those living in poverty and aid in boosting people’s health.

“An Urban Agriculture Incentive Zone is another promising weapon in the fight against our obesity and diabetes epidemics,” says Yeager. “As an added bonus, it helps reduce blight while expanding economic opportunities.”

Yeager says that big developers will often purchase parcels of land and wait until the time is right to build. This results in blighted and vacant lots, many of which could be put to use in urban agricultural production.

Wasserman believes that an Urban Agriculture Inventive Zone would benefit nonprofit organizations in the country that provide local produce, host community gardens and teach gardening classes to low-income residents. Some of these organizations include Veggielution, Garden to Table and Valley Verde.

“In addition to supporting our farmers, I support the practice of local agriculture production in the urban areas of Santa Clara County,” Wasserman says. “This incentive to produce agriculture in urban areas will help people learn more about where our food comes from, and increase their access to affordable and healthy foods.”

Zach Lewis, executive director of Garden to Table, echoes Wasserman’s sentiments. “The Urban Agriculture Incentive Zones Act will impact Santa Clara County by facilitating the creation of more urban agriculture projects that will stimulate healthier communities and happier people,” he says. “There is so much energy and interest in building a sustainable food system, and this will make that effort easier.”

One concern is possible loss of revenue due to decreased property taxes. Any revenue loss would be spread between the county and in-county local governments. However, Yeager and Wasserman believe that any property tax losses will be minimal, and the benefits of this program would greatly outweigh slight tax shortfalls.

In a press release, Yeager and Wasserman cite a New York City study that showed property values in a low-income neighborhood increased by almost 10 percent after a community garden was built in the area.

A potential sticking point is a provision of Assembly Bill 551 stipulating that an Urban Agriculture Incentive Zone cannot be established within the boundaries of a city unless both the city and county have consented. Thus, it’s possible that San Jose and other cities located within the county must give their approval before an Urban Agriculture Incentive Zone can be established in Santa Clara County.

Yeager envisions the possibility of schools partnering with urban agriculture operations—this way, students would learn where their food comes from, and would have greater access to healthy fare. He also feels that every county in California could benefit from similar urban farming initiatives.

The Santa Clara County Board of Supervisors voted 5-0 in favor of further study of this proposal. Yeager is optimistic that the proposal will be approved in a matter of months.